This, I suppose, is Leahy’s way of trying to look tough on terror.

Greg Tinti has the video and transcript.

Here’s the latest on the Senate debate on the bill. The Republicans in the Senate displayed some backbone on this one, rejecting the moderate Republican Arlen Specter’s amendment to the bill, which, according to the NYT, would have created “a new system for interrogating and trying terror suspects that would have guaranteed such suspects access to the courts to challenge their imprisonment.”

Update I 4:51 PM: Stay tuned to Allah at Hot Air for the roll call on this vote – the Senate should be voting shortly.

Update II 6:07 PM: Leahy’s on CSPAN right now lying about the NIE report, claiming the adming “held on to it for six months” (which is a lie). Don’t these guys have any shame? 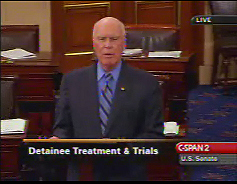 Update IV 7:01 PM: The usual suspects who have voted have voted so far have voted no: Levin, Leahy, Chafee, Reid. Keep it tuned to C-Span2 if you want to watch the votes as they roll in. I think I see Hillary and Leahy chatting it up. Bleh. Lieberman voted in favor.

Update VI 7:34 PM: The roll call will be on this page. They have the link up but have not posted the votes.

Update VII 7:49 PM: The votes are posted. Here are the nays: