While the 2004 elections are a memory for most people, a former Kerry strategist has written a tell-all explaining, among other things, why Kerry voted for the 2002 Iraq war resolution:

WASHINGTON — Senator John F. Kerry voted for the Iraq war resolution in 2002 after weighing the political ramifications and being told by his future campaign manager that he would never be elected president in 2004 unless he sided with President Bush on the issue, according to a forthcoming book by Kerry’s former strategist.

The book by veteran Democratic Party strategist Robert Shrum, titled “No Excuses,” paints a portrait of an often-dysfunctional Kerry presidential campaign in which senior strategists clashed with each other.

It also quotes e-mails from Kerry’s former campaign manager that are highly critical of the behavior of Kerry’s wife, Teresa Heinz Kerry . An advance copy of the memoir of Shrum’s years in politics, slated for release in early June, was provided to the Globe.

Shrum, who was brought into the campaign to help provide Kerry with a strategic overview, provides a vivid de scription about the events leading up to Kerry’s decision to vote for the war.

He writes that Kerry telephoned him on the eve of the Oct. 11, 2002, vote. Shrum said Kerry was skeptical of Bush’s claim that Iraq had weapons of mass destruction and that he “didn’t trust Bush to give the diplomatic route a real chance.” Nonetheless, Kerry asked Shrum whether he would “be a viable general election candidate if he was in the small minority of senators who voted no.”

Shrum wrote that he told Kerry it was “impossible to predict the political fallout if we went to war.” But he wrote that Jim Jordan, Kerry’s former Senate press secretary and future campaign manager, “was insisting that he had to vote with Bush.”

Shrum wrote that Jordan had “hammered” Kerry with a warning: “Go ahead and vote against it if you want, but you’ll never be president of the United States.” Kerry voted for the war resolution and Jordan became Kerry’s campaign manager three months later.

And no one is denying this happened, either, although this little tidbit that is supposed to redeem Kerry somewhat:

Kerry’s chief of staff, David McKean, said he walked with Kerry to the Senate floor before the vote. He recalled telling the senator: “Obviously a huge factor here is whether you believe there are weapons of mass destruction. He said, ‘I have no doubt about that.’ “

So to iron this all out: Kerry supposedly really did (uh huh) believe Saddam had WMD, and his real desire was to have the UN be the decider of what the US should do in response (surprise!), but because of politics and not wanting to be seen as weak, he voted in favor of the Iraq war resolution. 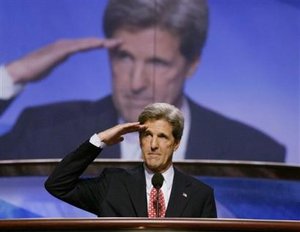 Related to Iraq: Did you hear there were at least three Senators who did not read the 90 page NIE report before their 2002 votes on the Iraq war? Find out who they are here.

Cross-posted at Iowa Voice, where I’m helping fill in for a vacationing Brian.

9 Responses to "Former Kerry campaign strategist: Kerry’s vote in favor of Iraq war was all for politics"