——–
“…and our troops deserve better than publicity stunts.” Thanks, Senate Minority Leader McConnell. 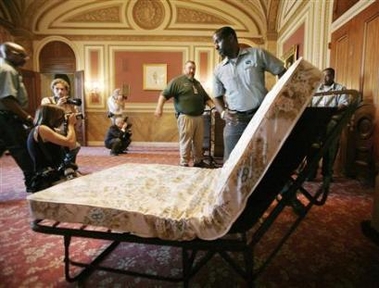 Caption: A worker lays out a cot for U.S. Senators in the Lyndon B. Johnson room, just off the Senate floor, in the U.S. Capitol Building in Washington July 17, 2007. U.S. Senate Democrats, hoping to raise pressure on President George W. Bush and his fellow Republicans to pull troops from Iraq, have scheduled an around-the-clock war debate starting on Tuesday. (Jason Reed/Reuters)

Michelle Malkin is liveblogging it. The left are doing a little liveblogging as well, so view/read their comments at your own risk.

Update I: Speaking of anti-war fanatics, I forgot to mention that Mother Sheehan graced my fair city of Charlotte, NC today. A local radio station talk show host (Keith Larson) had a surprise for Cindy and her entourage:

Infamous war protestor is in Cindy Sheehan is in Charlotte tonight and right now holding a rally calling for the impeachment of President Bush.

Meanwhile, WBT radio personality Keith Larson has organized an impromptu softball game in order to take up the space that Sheehan had intended to use for the protest.

There’s video at that link of Roussey’s report.

I haven’t been able to find a good recap of her visit here, but I heard that she didn’t actually speak due to ‘security concerns.’

Update II: Bad news for Democrats – and the liberal anti-war NYT. It must have really pained them to publish this:

WASHINGTON, July 17 — A handful of Republicans who have distanced themselves from President Bush on the war in Iraq refused Tuesday to back a plan to withdraw American troops from the conflict, leaving Senate Democrats short of the support needed to force a vote on their proposal.

As the Senate headed into an all-night session complete with cots in Capitol meeting rooms and an antiwar vigil across the street, some Republicans who have gone public with their complaints about the war strategy also weighed in against the Democratic withdrawal plan as ill-advised and driven mainly by partisan considerations.

“You wonder if they are more interested in politics than dealing with the substance of this” said Senator George V. Voinovich, Republican of Ohio.

Senator Judd Gregg, Republican of New Hampshire, labeled the Democratic plan calling for a troop pullout to begin within 120 days vague and unenforceable.

“If it did pass, it would lead to chaos in Iraq and a dramatic increase in casualties” said Mr. Gregg, who is backing an alternative plan that incorporates the recommendations of the bipartisan Iraq Study Group.

Related: Must-read via Robert Bluey: The Tale of Two Propaganda Machines. A preview:

This morning, a “Democratic official” disclosed Harry Reid’s plans for tonight’s Senate debate on Iraq. The memo, as reported by Politico, gives instructions on how to use the media to force America’s defeat in Iraq.

Wed. AM Update: Here’s the latest, via CNN’s Political Ticker:

Sen. John Kerry of Massachusetts, the Democratic presidential nominee in the last election, had the floor as the sun started rising over Capitol Hill.” (AP)

“The office of Senate Majority Whip Richard J. Durbin (D-Ill.) dispatched interns to buy toothpaste, toothbrushes and deodorant for delivery to GOP leadership offices, with a note offering the ‘supplies
for your sleepless night.’ It added: ‘Help us bring an end to this war.'” (Washington Post)

CNN’s Dana Bash reports a procedural vote is expected at 11 am ET on the Democrats measure to start bringing troops home in 120 days, with a withdrawal deadline of April 30, 2008.

Jules Crittenden has a link roundup of blogger reax.

11 Responses to "Senate all-nighter quote of the evening: “Our enemies aren’t threatened by talk-a-thons …”"