It may be because insurgents ‘can’t take the heat [literally]’:

As we close out another month of war in Iraq, I see that the number of U.S. servicemen killed has dipped to its lowest monthly total of the year. July is typically a month with less casualties in Iraq — in each of the past four years of war, July has been one of the least deadly months for U.S. soldiers fighting in Iraq.

While some speculate this is a sign that the tide is turning there this year, perhaps we can look to the weather instead. July in Iraq is unrelentingly, mercilessly hot, with high temperatures well above 100 degrees each day, with few clouds and no precipitation. Average highs in the summer typically rise to 110 degrees, while some areas have reported temperatures as high as a blistering 118 degrees.

And here I thought everytime we filled up that SUV and contributed to global warming we were 1) helping to fund terrorists and 2) engaging in an activity that would one day ‘kill the earth.’ Good to know that at least one weather forecaster out there believes global warming actually contributes to thwarting terrorism and saving lives …

James Taranto is on the same page:

But wait. If you read the papers, you know that all scientists agree America does control the weather. Warm weather is caused by “climate change” or “global warming,” which in turn is caused by Americans’ driving SUVs, raising flatulent livestock, etc.

So every time you take your Hummer out for a spin, you are helping warm the planet and thereby make terrorists in Iraq less dangerous. By contrast, those who argue that we should forestall global warming are helping kill American servicemen. Have they no sense of decency?

The Goracle was too speechless by the news to respond: 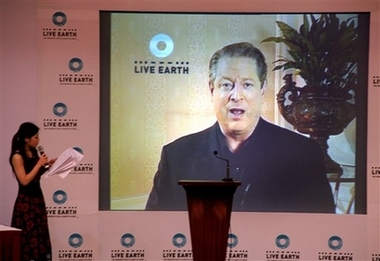