WASHINGTON (AP) – Sen. Hillary Rodham Clinton on Wednesday came out against granting driver’s licenses to illegal immigrants, after weeks of pressure in the presidential race to take a position on a now-failed ID plan from her home state governor.

Clinton has faced criticism from candidates in both parties for her noncommittal answers on New York Gov. Eliot Spitzer’s attempt to allow illegal immigrants in his state to receive driver’s licenses. Spitzer abandoned the effort Wednesday.

“I support Governor Spitzer’s decision today to withdraw his proposal,” Clinton said in a statement. “As president, I will not support driver’s licenses for undocumented people and will press for comprehensive immigration reform that deals with all of the issues around illegal immigration including border security and fixing our broken system.”

The article makes it sound like Hillary never did say whether or not she was in favor of Spitzer’s plan, but the relevant part of the transcript from the debate shows that she did, and the day after the debate, she made it clearer, in the nuanced way that Democrats has become fashionable in Dem circles, that she supported Spitzer’s plan (emphasis added):

A day after she appeared to struggle to give her views on the subject, Hillary Rodham Clinton offered support today for Gov. Eliot Spitzer’s effort to award New York driver’s licenses to illegal immigrants, as her campaign sought to contain potentially damaging fallout from a what her own supporters saw as a tense and listless debate performance.

Mrs. Clinton’s statement affirming her support of Mr. Spitzer in his office came less than a day after she offered a muddled and hesitant position on the bill, prompting a round of denunciations by her opponents. It signaled the extent to which her advisers viewed that moment as the biggest misstep she made in the debate, and one with long-term potential to undermine her candidacy.

“Senator Clinton supports governors like Governor Spitzer who believe they need such a measure to deal with the crisis caused by this administration’s failure to pass comprehensive immigration reform,'” her campaign said.

Mrs. Clinton’s advisers said that she had not studied either plan, and was not specifically endorsing either of them.

Still, the wording of the statement was murkier than what many of her opponents have said in either supporting or opposing Mr. Spitzer’s initiatives. Among those opposing it were Senator Christopher Dodd of Connecticut; Senator Barack Obama of Illinois supported it.

“Murkier”? How about contradictory? Mrs. Clinton clearly can’t grasp how to successfully fool people by standing on both sides of an issue like her husband did when he was president.

So let’s recap (the relevant quotes can be read here): She initially said at the debate that she supported it, and the denied it minutes later (which the Edwards campaign cleverly demonstrated to people with this video). The next day she put out a statement of “broad” support for Spitzer and his efforts on illegal immigration, while at the same time trying to spin it as though it wasn’t an “official” endorsement. Two weeks later, after stumbling through questions about her position on the issue that she never would answer directly (with her husband bumbling miserably on that front as well), fellow Democrat Spitzer announces he’s dropping the idea due to substantial opposition, and all of a sudden Hillary has no doubts about where she “stands.” 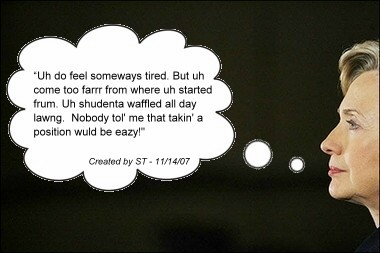 (Inspired by this Southern-style Hillary moment).

More: Did the Clinton camp put pressure on Spitzer to change his tune? One NY Post reporter is saying “yes” (h/t: Stop The ACLU).

14 Responses to "Hillary: “As president, I will not support driver’s licenses for undocumented people”"