The end of the year always brings about reflection time for everyone, and the mediots are no exception to the rule. The LAT and NYT both have pieces up today about the Democrats’ lack of effectiveness at implementing their agenda since regaining the majority in last year’s elections.

I know it was unintentional, but the piece is actually fairly complimentary to the Republicans’ steadfast loyalty to the president and many of his (and their) priorities in a time that is typically classified as a president’s “lame duck” years.

The two articles primarily marvel at the President’s – and Republicans in Congress – ability to thwart the Democrats’ on most of their agenda, especially on the war in Iraq, as well as devote a significant amount of space to blaming the partisanship solely on Republicans, while ignoring hollow Democrat pledges to end the “divisions” in Washington in the “spirit of bipartisanship” back in 2006 – which we saw right from the start, courtesy of the left, wasn’t going to happen. Of course none of us are surprised at the NYT’s and LAT’s respective failures at neglecting to mention to mention that little inconvenient truth.

Things are so bad for the Democrats in Congress these days that their own party leadership are being pressured by “junior” party members (h/t: Captain Ed) to focus more on domestic issues in the upcoming election rather than primarily on Iraq, due to what they call “Iraq fatigue.” But as McQ at QandO points out, “Iraq fatigue” can’t be the only reason “junior” Democrats want to shift their election year focus elsewhere:

Or course there are two reasons for that: one, with progress in Iraq, they look foolish using pre-surge rhetoric to describe the present situation there. It simply doesn’t fit anymore as is obvious in these quotes. After 40 attempts to effect or end the war and 40 losses, many taken earlier when there was at least an outside chance of passage, reality has set in for most of the Dems.

Two, the war is becoming less and less visible through the media. As less violence and carnage are evident, less coverage results. Kevin at Pundit Review notes a “Media Reality Check” from Media Research which demonstrates the point and provides us with this graphic representation of it: 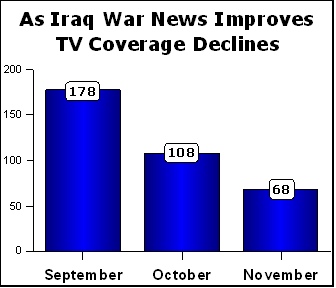 Obviously less media coverage translates into less immediacy in terms of popular attention in terms of the war. And that, of course, means that the war has become less than a political winner in terms of hot issues, and could become a huge liability if they keep attention focused on it as they are right now.

Yep, they realize that politicizing the Iraq war this time around with their usual defeatist message has the potential to be a losing issue for them, so they’ll politicize and demagogue issues they think they can gain traction with the American people on.

My worry through all this is that while the Republicans have had a fair amount of success keeping the Democrats from being able to fully implement their agenda, that with all the retirements we’re seeing coming from House Republicans this year, that it will be harder for a Republican president to do what Bush has done in the last year against Democrats if the Democrats make significant gains in the House (the Senate may not be as much of a problem as some have anticipated).

And that assumes, of course, that we’ll have a Republican president.

12 Responses to "LAT, NYT whine about Bush not living up to “lame duck” status"