Here’s a heartwarming holiday story that will be sure to tug at your heartstrings:

ALBANY, Ga. – A military working dog wounded in Iraq during a rocket attack that killed its Marine handler was adopted Friday by the slain Marine’s family.

Cpl. Dustin Lee’s family planned to take home the bomb-sniffing dog — named Lex — on Saturday after the 8-year-old German shepherd was granted early retirement. It was the first time a working dog was granted retirement to live with the handler’s family, officials said.

On hand for a ceremony at the base were the Marine’s parents, Jerome and Rachel Lee, his sister, Madison, 16, and brother, Camryn, 12, of Quitman, Miss.

“It’s not going to bring back my brother, but it’s something close to it,” said Madison Lee as she played with Lex after the ceremony.

Military officials initially told the family that Lex had another two years of service before he could be adopted. But the family lobbied for months — even enlisting the aid of a North Carolina congressman — and the adoption came exactly nine months after the 20-year-old Marine was killed and his dog wounded on March 21 in Iraq’s Anbar Province.

The Congressman who helped the family was the normally non-sensical Walter Jones. In this case, he did the right thing.

2nd Lt. Caleb Eames, spokesman for the Albany base, said Lee and Lex were sitting outside at a forward operating base in Karmah when they were hit by shrapnel from a 73mm rocket explosion.

“A part of Dustin is in Lex,” said the fallen Marine’s father. “To have Lex at home is a part of having Dustin at home.”

Rachel Lee said she believes her son’s spirit will live on through the dog because of their close bond and because they were together during the final moments of her son’s life.

Looks like Lex is taking to the Lee family well: 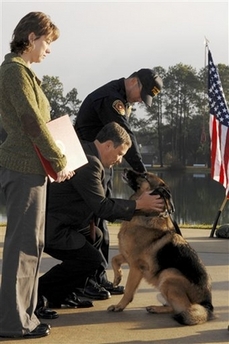 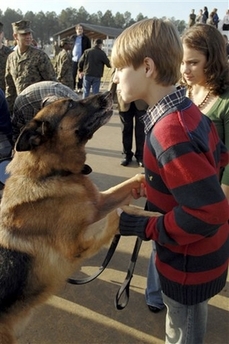 Caption: German Shepherd dog Lex and new owner Camryn Lee get closer together with sister Mady looking on after the adoption ceremony Friday, Dec. 21, 2007, at the Marine Corps Logistics Base in Albany, Georgia.
(AP Photo/Walter Petruska)

Patterico guest poster DRJ wrote about this story back on the 13th when the decision by the Marine Corps was announced, and has more on Cpl. Dustin Lee and his family.

Cross-posted at Right Wing News, where I am helping guestblog for John Hawkins on Sundays.

5 Responses to "Man’s best friend adopted by his family"