Don’t rule him out for a possible veep selection, though. He could be the ticket to shoring up the anti-war left contingent.

Update: The Richardson campaign is denying the report. Stay tuned …

Related: James Lewis at The American Thinker pegs many Obama fans on the left in this scathing piece on why so many of them support the unseasoned Senator:

What adult would vote for a totally untested presidential candidate by falling in love? Maureen Dowd, Frank Rich, Senator Joe Biden, and a million other Democrats — that’s who. The New York Times stable of Leftie pundits is reliving the Decade of Love. The Washington press corps has the teenie bopper hots over Barack Obama — such a romantic name. A real African! Almost.

What does he believe? What has he actually done? Uhmmmm… Well…

It’s Son of Camelot! And he’s got the youth vote! Children just know these things!

This is straight out of Dumb and Dumber. If you despaired about the media’s endless love affair with Bill Clinton, the Master of Slick, because he Cares About You, you’ll get to revisit those feelings now. For we have a new national idol!

Children often have fantasies about a Good Parent — one who loves you and takes care of you forever and ever, who forgives your transgressions whatever they may be, who demands nothing, and never, ever hurts your feelings. Obama is now the Good Parent of the childish Left — a good majority of the Dems, it would seem.

In a child’s mind the Good Parent is often played against a complementary fantasy, the Bad Parent — call them Republicans in this case. The Bad Parent stands for the sterner aspects of reality. Since Leftism is basically an infantile protest against adulthood, Republicans represent what Sigmund Freud called the Reality Principle.

The childish Left constantly needs someone to adore — FDR, JFK, Bill Clinton before the Fall. Even Hillary during her New York senatorial run. But Hillary looks visibly older today, and the Good Parent can’t be allowed to age. That shakes the foundations of a child’s perfect world. So all that need for love has to be transferred to a younger Good Parent. It’s like the new trophy wife of the aging executive. The Good Parent must be immortal.

The only thing I would add to it is that it’s characteristic of the left to want to maintain an image of moderatism in order to get elected when in reality the platforms being put forth by the three top tier Democrat candidates take a jolly green giant leap over the border from “moderate” liberalism into pure Socialism, some plans moreso than others. Democrats, naturally, fiercely reject these types of characterizations of their socialistic ideas, and work hard at masking what they’re advocating by wrapping each billion-dollar rights-snatching plan in a pretty red bow and calling it “healthcare for all” and “baby bonds” and “free college tuition” and “shared prosperity.”

After all, it’s much more politically beneficial to wear a mask, than to enlighten people as to your party’s real agenda. 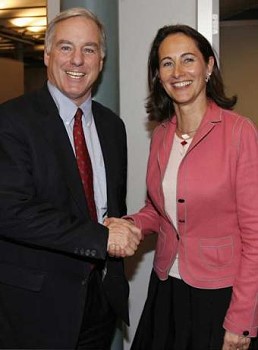