BUENA PARK, Calif. (AP) – Southern Baptist pastor Wiley Drake said Wednesday that he is being investigated by the Internal Revenue Service for his endorsement of GOP presidential hopeful Mike Huckabee in a press release written on church stationery.

Under federal tax law, church officials may legally discuss politics, but they cannot endorse candidates or parties without putting their tax-exempt status at risk. Most who do so receive only a warning.

Drake, a prominent pastor in the Southern Baptist Convention, said he received a 14-page letter from the IRS on Feb. 7.

IRS spokesman Rafael Tulino said Wednesday that he could not comment.

On Aug. 11, Drake wrote a press release on letterhead from the First Southern Baptist Church in Buena Park that announced his personal endorsement of Huckabee, who also is an ordained Baptist minister.

“After very serious prayer and consideration, I announce today that I am going to personally endorse Mike Huckabee,” the release said. “I ask all of my Southern Baptist brothers and sister to consider getting behind Mike and helping him all you can.”

He added: “I believe God has chosen Mike for such an hour, and I believe of all those running Mike Huckabee will listen to God.”

A complaint was filed with the IRS by Americans United for the Separation of Church and State.

The only way this could become big news and garner front page headlines is if the IRS decided to do more than just “warn” Drake. If Huckabee has dropped out of the race by the time the investigation is over, and the IRS’ decision is to revoke Drake’s tax-exempt status, I wonder if the Huckster would try to jump in and save the day? Don’t know what he would try to do, but rest assured The Usual Suspects would be all over it in declaring it more “proof” that Huckabee secretly desired a US “theocracy” – except he’d call it something different, like maybe a “Huckacracy” …

If so, he might just have a bit of competition on his hands: 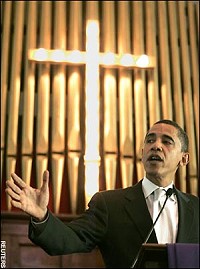 “We’re going to keep on praising together. I am
confident that we can create a Kingdom right here on Earth.”
–Rev. BO, declaring his intent to turn
this country into an Obamacracy – 10/7/07