After burning the midnight oil, I wake up this morning to find out that the mid-70s sunny day we were supposed to be having here has been replaced by a cloudy mid-60s 80% chance of strong storms day. Ah well – it’s the weekend, and we need the rain, so I’m not complaining.

Here are a few links for your perusal:

—– My thoughts and prayers go out to the victims of last night’s “possible tornado” in downtown Atlanta, which damaged the CNN Tower and the Georgia Dome, among other landmarks. So far, there are no reports of anyone killed, thank goodness, but they are still in the process of assessing the damage. 27 have been reported injured, none with life-threatening injuries.

—– The big headline at Drudge is this story from the New York Times which talks about how the debate over what to do about the Florida and Michigan delegates is ripping the Dem party apart, so much so that big money contributors/fundraisers for the Dem party in Florida are saying if you aren’t going to count my vote, then give me my money back. Michigan Democrats are close to finalizing a plan to have another primary in MI in June – paid for by “private funding,” but the future of Florida delegates remains uncertain. The Clinton campaign hasn’t fully committed to the idea of a June primary in MI, while Barack Obama, who is a guaranteed winner when it comes to caucuses, is naturally “skeptical” of the idea of an MI primary.

—– House Democrats finally took the time yesterday to hold a vote on FISA revisions they held up a month ago so they could do more critical things related to our national security like issue contempt citations for Harriet Miers and Josh Bolten, as well as recess in time for Nancy Pelosi to attend her daughter’s wedding. The new bill does not have the protections for telecoms in it that the Senate version contained. Senate leaders have said they will not pass a bill without protection for the telecoms, and Bush is threatening to veto, should the House version reach his desk. These people never learn.

—– About that Pentagon report which supposedly demolished the president’s assertion that Al Qaeda ties were one of the reasons we should wage war in Iraq: Think again. Stephen F. Hayes has more.

—– And speaking of Iraq, Army Staff Sergeant Anthony J. Diaz wrote in an opinion piece in yesterday’s Washington Post that, from his vantage point in Adhamiyah, the surge is indeed working. The AP, meanwhile, asks hopefully, “Iraq violence drops, but for how long?”

—– Regarding the controversial greeting the Iraqi government gave Iran’s Islamofascist “leader” Mahmoud Ahmadinejad when he visited Iraq a few weeks ago, Michael J. Totten writes that it may not have been as bad a signal many made it out to be.

—– Mary Katharine Ham is in Israel and has some fantastic pictures here and here.

—– Last but not least, if you’re not watching any of the college basketball tournaments this weekend, you should be. The ACC tourney is being held right here in Charlotte. GO BLUE DEVILS! 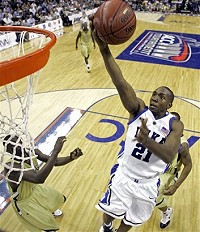 Here’s today’s complete schedule of games. Duke plays the Clemson Tigers at 3:30 ET. The Tarheels play against Virginia Tech at 1:30. The winners of both games will go on to play each other for the ACC championship tomorrow at 1. Naturally, the sports media are hungry for another Duke/UNC classic. If that ends up happening, I sure hope the end result is nothing like we saw last week when the ‘heels won 76-68 after holding the Devils scoreless for the last 5 and a half minutes of the game they played at Cameron on “Senior Night.” Ugh, ugh, ugh.