CBS’ Lesley Stahl recently interviewed The Goracle for a 60 Minutes segment that will air this coming Sunday. As per the norm, when asked about skeptics of the theory of man-made global warming, Gore pulled out the ol’ insult book to disparage those who have dared to disagree with his ‘expertise’:

(CBS) Self-avowed “P.R. agent for the planet” Al Gore says those who still doubt that global warming is caused by man – among them, Vice President Dick Cheney – are acting like the fringe groups who think the 1969 moon landing never really happened, or who once believed the world is flat.

The former vice president and former presidential candidate talks to 60 Minutes correspondent Lesley Stahl in an interview to be broadcast this Sunday, March 30, at 7 p.m. ET/PT.

Confronted by Stahl with the fact some prominent people, including the nation’s vice president, are not convinced that global warming is manmade, Gore responds: “You’re talking about Dick Cheney. I think that those people are in such a tiny, tiny minority now with their point of view, they’re almost like the ones who still believe that the moon landing was staged in a movie lot in Arizona and those who believe the world is flat” says Gore. “That demeans them a little bit, but it’s not that far off,” he tells Stahl.

Oh, and as far as number of skeptics being a “tiny, tiny minority” – guess again, Goracle.

BTW, it’s been over a year since Senator James Inhofe, a ranking minority member of the Senate Committee on Environment and Public Works, requested The Goracle sign the “Personal Energy Ethics Pledge” which reads: 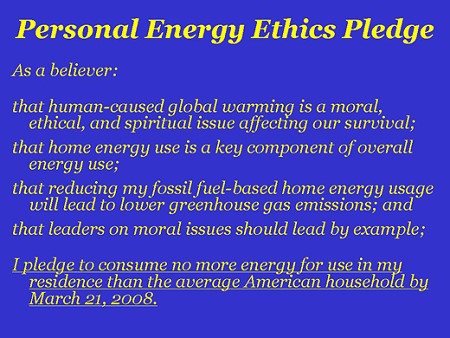 Seeing that the “by” date on the pledge has already passed, I’m sure Gore is just waiting for Inhofe to update the pledge with next year’s date before he signs off on it. Yep, I’m totally sure that’s the hold up

5 Responses to "VIDEO: The Goracle claims that if you don’t believe in man-made gw, you’re no better than a wacko conspiracy theorist/flat earther"