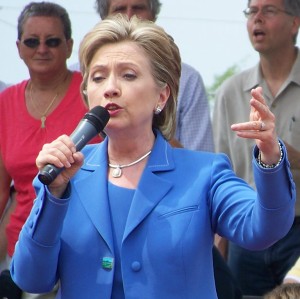 Yesterday, Hillary Clinton spoke to a crowd of supporters at the Rotary Centennial Pavilion, which is downtown Gastonia, NC. I guesstimated that about 500 were at the rally, but the Charlotte Observer’s Jim Morrill (who I saw there) wrote that the number was closer to 700.

Senator Clinton was scheduled to arrive at 1:30, but she didn’t get there until 2:45. NC Governor Mike Easley, who endorsed her earlier in the week, chivalrously blamed the late arrival on himself, but when Hillary took the microphone she said it was more her fault because of all the security everyone has to go through before boarding their plane.

Yours truly arrived at noon, and stood on her feet until 3:30, about five minutes before the rally ended. It was overcast, and as a result, I’m a bonafide “redneck” today as my shoulders and neck are seriously sunburned. It was worth it, though, as I’ll soon explain.

The highlight of the day for me was meeting Fox News’ Major Garrett, along with Time Magazine’s Joe Klein. They arrived before the rest of the travelling press corps, who joined them around the same time Hillary took the stage. Both of them were extremely friendly, and obviously enjoyed talking with people in the crowd who recognized them. Klein and I talked about how he took so much heat from the left on his Iraq war position, and he told me he always catches hell from both sides. We also talked some about the Obama rally, as he had not heard about how many were there and how many people Cricket Arena would hold.

As I was with Klein, I was awestruck upon first seeing Major Garrett but after taking about 20 minutes to get up my nerve, I went up and introduced myself as a conservative Republican who watches Fox, forgetting to give my name (he had to ask), and complimented him on the interview he did with Obama (scroll) right after the Rev. Wright controversy started to heat up. He was very chatty and we talked about rally sizes, and I told him that if Hillary were in Charlotte or Raleigh that the rally sizes would be bigger (Gastonia is a very conservative, blue collar city). He pointed out that crowd size was not always an indicator of the level of support a candidate had, and said that in Ohio some of the rallies for Hillary were painfully small, which made sense, considering her base of support in Ohio were working class Democrats who had to work and couldn’t always get away to attend a rally. I told him I had seen Obama the night before, and he asked me if I went to the Jefferson-Jackson dinner, and I laughed and said as a Republican, I don’t think I’d have been particularly welcomed. He chuckled. He graciously answered questions from both me and another incognito Republican who attended the rally, and when he didn’t have answers, he said so. He commented that some journalists might try to make up answers to stuff they really don’t know, but that he would be straight up and tell you when he didn’t. I told him that it definitely comes across to media watchers when they feel like the media is giving them a line of bull, and also said he was one of the Fox correspondents I feel always “keeps it real.”

I also had to confess to him my big crush on Special Report host Brit Hume. He got a huge kick out of that and told me that I’d have to stand in line, that Hume had a lot of fans. Hmpfh! Prior to Hillary’s arrival, he stood beside the red velvet rope that separated the press from the general public, right next to the two people I was standing with, and updated us via info from his Blackberry as to where Hillary was. Her plane landed around 2:20.

Hillary’s speech was the standard fare you expect at a Democrat rally, and it was clear the crowd of mostly working class white people really, really liked her. The two people I stood next to and chatted with for most of the rally were longtime Clinton supporters, and were exactly the kind of down to earth people you typically find in the rural parts of this state. The husband was a Vietnam vet, and I shook his hand and thanked him for his service. They helped save my spot a few times as I toured the area and got many of the pictures you’ll see at the Flickr website.

In fact, that couple typified just about everyone in attendance. Most of your southern, country Democrats are not like many of the latte liberals you find in the city. The Hillary supporters I spoke with yesterday told me that her biggest quality to them is that she was a fighter and “what you see is what you get.” I had to grit my teeth on that last response, because it’s clear to me that she’s not – and when she arrived at the event and walked up to stand in the back of that pick-up truck beside our Governor, I was struck at the contrast between who she was and the crowd she was speaking to. She looked like an ice queen putting on a warm front in front of easygoing, laid back, good as gold southern country Dems who trust her to represent their values.

It saddened me, because Hillary Clinton is someone who is in this not because she cares about those kind people, but because she lusts for pure power. Even though I don’t like Obama’s policies and the fact that he’s a proven hypocrite on certain issues just like many other politicians are, there’s no denying that in spite of his really, really bad ideas that he really does care about people. You can tell McCain cares, too, although sometimes that temper could make one believe otherwise. Sure, there’s that element of wanting power that exists in anyone who runs for president, but I don’t get the impression that that is the prime motivation for either. Hillary, on the other hand, reminds me of a viper who would bite you behind the back the first chance she got if it meant she could win votes and gain more power.

Anyway, that’s my take on the rally. It was worth getting that sunburn to meet two media figures I admire and to talk to so many interesting people who are not like the raging Democrat types you typically come across online. These people have seen jobs come and go throughout this state, are sick of higher gas prices, worry about the cost healthcare, and believe Hillary has the magic solutions to all of that and more. I may disagree with them politically, but I was honored to mingle with them. They’re wrong on Hillary, and those “solutions,” but they are good people who care and would give you the shirts off their backs if necessary.

I experimented with the video capture on my camera again, and thought I had snagged Grammy nominated singer/songwriter and Hillary supporter Sophie B. Hawkins singing her re-written version of “Damn, I Wish I Was Your Lover” – however, I think I recorded over it by accident (you can watch the official vid of the re-written song here). But I did get about a minute’s worth of Hillary talking about foreclosures and healthcare, which you can view below:

I took over 50 photos while there (slideshow here).

Related: The Charlotte Observer has made their decision in the Dem primary, and it’s not for Hillary Clinton.