I was just perusing the politics photos at Yahoo News and came across a photo of a woman who looked suspiciously familiar: 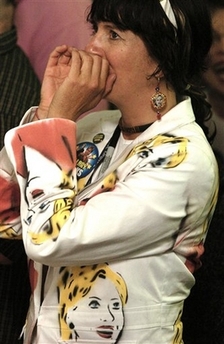 Caption:Gretchen Baer, of Bisbee, Arizona, decked out in images of Democratic presidential candidate Hillary Rodham Clinton calls out to her before campaign speech at the West Virginia State Capitol in Charleston, W.Va., on Thursday, May 8, 2008.
(AP Photo/Jon C. Hancock)

Now take a look at this photo I took at this past weekend’s Hillary rally in Gastonia. And this one, too.

Does that look like the same woman to you? It does to me.