You know, I fail to see how this heals the oceans, helps Michelle Obama’s kids, or has anything to do with why people should vote for or against John McCain. Then again, I’m not the blogosphere’s cheerleader-in-chief for a candidate with no executive experience, no foreign-policy experience, no military experience, and a grand total of three years in national office with no legislative track record. If I was, I’d be tempted to find distractions like the tooth color of a man whose mouth and the rest of his body got tortured and beaten for five and a half years in service to this country.

That was written in response to one of the burning issues of the day that was blogged about earlier by Kos himself. The “issue”? John McCain’s teeth. Yes, we’re in familiar territory. Thankfully, as Noel Sheppard notes, many of the commenters are taking Kos to task for his idiocy in writing such a trivial, mean-spirited post (but then again, don’t most posts there fit that description?).

What else is the far left snickering about today? Sam Stein at The HuffPo has hilariously asserted that John McCain “ripped off” Barack Obama’s slogan and logo, and has the screencap that supposedly “proves” it: 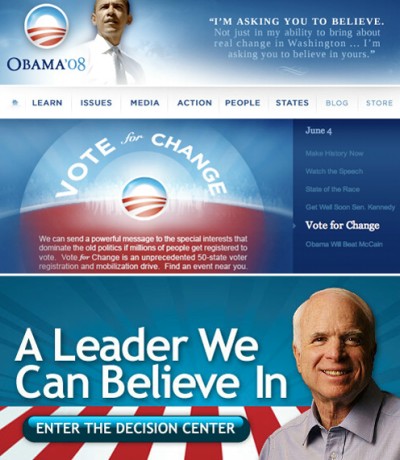 This is clearly designed to one-up Obama on his constant use of the phrase “believe in.”

If this is really a “rip off,” I wonder where his outrage is over Obama’s rip off of the Comfort Inn logo?

Change You Can Take Comfort In(n)

5 Responses to "Quote of the day"