He and Hillary appeared together today for the first time in, like, forever, in – predictably – Unity, NH.

They exchanged a peck on the cheek later: 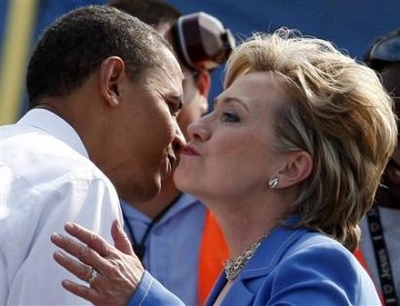 He recently hired a spiritual advisor who has been an informal advisor to the campaign for the past year.

He’s finally planning an extended visit to a few overseas countries to shore up his foreign policy creds, including Afghanistan and Iraq.

He goes to a gym in DC and the Democrat nominee for president is asked for his ID.

Will he throw his gym off the bus next?

2 Responses to "Obama on the move"