I know.Â  You’re probably thinking “What do I care what Lanny Davis thinks about the Iraq war?” Well, normally I would agree with you, but after reading what he wrote for the Washington Times (yes, the WaTimes), I think you’ll agree with me that his opinion is worth reading, considering he at one point was an anti-Iraq war Dem.Â  He’s still a Dem of course, but his opinion on the Iraq war has significantly changed.Â  Here’s a bit of what he wrote:

But … then came my first moment of doubt.

I saw on TV in early 2005, in their first preliminary democratic elections, long lines of Iraqis waiting to vote under the hot desert sun with bombs and shrapnel exploding around them. Waiting to vote!

And then there was that indelible image – an older woman shrouded in a carpetlike cape, smiling gleefully and holding her purple finger in the air for the TV cameras, purple with ink showing that she had voted.

Smiling! In the middle of war! At U.S. troops standing nearby!

Wow, I thought. Is it possible I was wrong?

Is it possible, I wondered, that Iraqis truly did want democracy and freedom and the right to vote and government of the people, just as we Americans do? And were willing to fight for it, with our help?

Wouldn’t that be a good thing? Even a great thing?

Maybe another democracy, however imperfect, other than Israel in the Middle East could lead to more moderation, possibly other democracies? Democracies that could serve as bulwarks against al Qaeda-type of terrorist states?

Then in 2005-06 came the increased violence from the Sunni insurgents against American kids, then the sectarian civil war between Sunnis and Shi’ites, with young Americans caught in the crossfire. My certainty in opposing the war and supporting a deadline for getting out re-emerged.

And then in early 2007 came the surge, which so many of us in the antiwar left of the Democratic Party predicted would be a failure, throwing good men and women and billions of dollars after futility. We were wrong.

Surely we owe the Iraqis who helped us, whose lives are in danger, immediate immigration rights to the U.S. Yet the shameful fact is that most are still not even close to having such rights.

Surely we owe the al-Maliki government and the Shi’ite and Sunni soldiers who put their lives on the line against Shi’ite and Sunni extremists and terrorists at our behest some continuing presence and support and patience as they strive to find peace, political reconciliation – and maybe even the beginnings of a stable democracy.

The only question is, for how long?

But for how long? I don’t know.

I just know I can’t get out of my mind that lady with the purple finger held up, smiling into the camera. If getting in was a mistake, then getting out – how and when – is not so simple as long as there is hope that she can someday live in a democratic Iraq that can help America in the war against terrorism.

There are the few Democrats who supported the Iraq war from the start (like Senator Lieberman, for example) whose support has remained strong and steady throughout.Â  There are the many Democrats like Rep. John MurthaÂ and Senator John Kerry, both of whom claimed to support the war in the beginning but who bothÂ took the easy way out when things got tough and demanded a quickÂ pull out.Â  Then there are the growing number of Democrats who were against the war at first but who slowly but surely have come to recognize how important it is that we not abandonÂ the missionÂ of freedom, stability, and securityÂ in Iraq, and realize the deadly consequences of a too-soon withdrawal.Â  Lanny Davis, though not a member of Congress, understandsÂ this now and I commend him forÂ not only conceding the points that continue to be made by Iraq war supporters, but doing it on the pages of what many (especially the left) call one of the most right wing publications in the country.Â

Then there are those Democrats like Senator Barack Obama,Â nominee for president ofÂ the US, who opposed the Iraq war from the start, who opposed the surge, and who upÂ until recentlyÂ refused to admit to the manyÂ gains that had been made in Iraq as a result of the surge effort, anÂ idea supported early onÂ (before it became popular)Â by Senator John McCain -theÂ other nominee for president, and then eventually by our current president who, like McCain, knew the risks associated with a too-quick withdrawal.

Senator Obama is in Iraq now.Â Â  I have said previously that because theÂ Senator has been all over the map on the issue of withdrawing from Iraq, Â that I simply do not trust him on the issue.Â  Even at that, though, I hope that now that his feet have actually touched Iraqi soil for the first time since the surge, andÂ  now that he is having a chance to meet with our generals on the ground as well as leaders in the Iraqi government, that Senator Obama will quietly reassess his position on withdrawal and at some later point down the road, admit, like Lanny Davis and someÂ other anti-Iraq war Democrats have done, that even though he was opposed to the Iraq war from the startÂ and wished it never started, that the successes on the ground cannot be denied and that he will not withdraw our troops from Iraq until it is clear that the Iraqi government, its military, and its security forces (aka law enforcement) can stand on its own feet without a large-scaled US presence there.Â Â

I’m not naive, and know the odds of him actually admitting this are long.Â  He’s staked hisÂ entire candidacy on his opposition to the war and promises to pull out all combat brigades within 16 months.Â Â  But even if he won’tÂ actually admit it, I pray that if he is electedÂ CIC thatÂ he really doesÂ rely onÂ what the commanders and generals on the ground say (as he has said once or twice that he would do)Â about the situationÂ in IraqÂ before he makes any more promises about a 16 month withdrawal.Â

It might be that if Obama is elected that by the time he takes the oath of office that the situation in Iraq will beÂ even more improved to the pointÂ that a 16 month withdrawal plan might be a feasible option.Â Â  Maybe it won’t be.Â  But if the guy has got a shred of the humanity in him that he acts like he has, he’ll shelve his originalÂ plans for Iraq and go about conducting the Iraq war as any capable Commander in Chief would: by letting the generals and commanders who live the war every dayÂ be his eyes and ears, and byÂ forgetting the noise of the naysayers, many ofÂ whose sole goal in all of this has not beenÂ to aid in the safety andÂ security of the United States in any way, but insteadÂ to hand George W. Bush a defeat, even though he will no longer be in office by the time future decisions on Iraq are made.Â

Maybe it will be McCain who wins, and we thankfully won’ thave to find out if Obama has the “judgment to lead” that he claims he does.Â  But if Obama is elected as our 44th president, hopefully he will take theÂ opportunity to show right off the bat that he possesses even an ounce of the judgment he claims to have by being a man, rather than a political animal, by doing the right thing when it comes to Iraq.Â Â Â  So many have made the ultimate sacrifice for the future of our country as well as the future of Iraq.Â Â  No matter who is elected CIC, they need to ensure that those sacrifices were not made in vain. 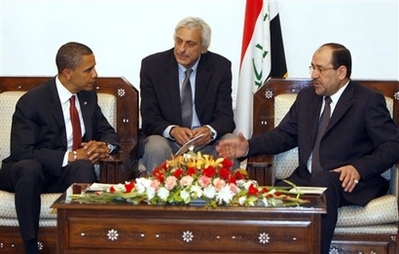 9 Responses to "Clintonista Lanny Davis on the Iraq war – PLUS: Obama in Iraq"