As I wrote this morning, all eyes are on Hillary Clinton today as she prepares to make what some are calling the most ‘important’ speech of her political career later this evening. As always if you can’t get to a TV, but have access to the Internet, C-SPAN has full coverage at this link.

Here are some links related to tonight’s – and the rest of the week’s – events in Denver:

—– The Politico writes an article titled “Five things to watch tonight.” The one I’m watching for the most will be the kind of reception she gets. Considering there is clearly no love lost between La Clinton, her hubby, and Obama, it will be interesting to see if she gets loud cheers on “ladies night” at the DNC or if there are boos mixed in, especially considering that during a ‘test run’ of her speech earlier today she did not mention Obama’s name.

—– And speaking of Bubba: Proving once again what a consumate jerk he can be, The Hill is reporting that The Slickster is slying trying to “undercut” Obama just two days before he makes his acceptance speech at Invesco Field:

DENVER — Bill Clinton appeared to undermine Sen. Barack Obama again Tuesday.
The former president, speaking in Denver, posed a hypothetical question in which he seemed to suggest that that the Democratic Party was making a mistake in choosing Obama as its presidential nominee.

Then, perhaps mindful of how his off-the-cuff remarks might be taken, Clinton added after a pause: “This has nothing to do with what’s going on now.”

Uh huh. Expect an angry, red-faced denial in the coming days. What.a.jerk. Whatever you may think about Obama, this is his week, and Bill Clinton should keep his bitterness under control until at least after Obama becomes the official nominee. Sheesh.

—– The Denver Post has an article up about how the Obama and Clinton camps are working on how to handle the roll call vote, and how to stave off a mutiny by Clinton’s diehards. From the Post article:

Supporters of Hillary Rodham Clinton furiously circulated petitions on the floor of the Democratic National Convention last night, hoping to stave off a plan to hold the convention’s roll call at breakfast Wednesday — out of the public eye — sources inside the delegations said.

The move being worked out between the Obama campaign and officials behind Clinton’s suspended bid, would work in two parts: Delegates would cast votes at their hotels Wednesday morning; that night, at the Pepsi Center convention site, the roll-call process would rely on the votes cast that morning, the delegates said.

The evening event would call on the delegation from Illinois, which Obama serves as the junior senator, and then move to New York, which Clinton represents.

After New York delegates applaud Clinton’s long-fought and historic candidacy, a motion would be made to accept the votes cast at breakfast.

The move is being resisted by some Clinton delegates, who are busy tonight circulating a petition among delegates as the opening night of the convention, titled “One Nation,” gets underway.

“We just want a roll call like you’re supposed to have,” said one of the delegates collecting signatures for the petition, who asked not to be named because of concern about friction within the party.

The Obama campaign denied that there would be a change.

“This is not true,” Jennifer Backus, a senior advisor, said in an email in response to a question about the negotiations for the roll call change.

I hope that means that we will get to see a Wednesday night roll call. I’m sure I’m not the only one who’d pay to see that

—– What color will Hillary be wearing tonight? Suitably Flip is taking a poll. My vote? “Fire Engine Red.”

—– Did ya hear the news? No one is watching the convention. I suspect that will change tonight and, of course, Thursday night for sure.

—– The rumor mill is swirling that the McCain campaign is considering announcing their VP pick on Thursday. This, I think, is bulloney. Obama’s symbolic speech is going to be the talk of the world and no way the fawning mediots are going to break away even for a half a second to cover the news of McCain’s pick. Wait til Friday, Mc, when the smoke clears from the DNC. Give Obama his night, then make your announcement.

—– Last but not least, my friend Patrick O’Hannigan has commentary posted on the goings on in Denver, and has themed his remarks based on the movie “Grease.” Kewl. Ya’ll know how I feel about that

By the way, we’ve got thunderstorms in the area. I plan on being back later to provide some light liveblogging on Hillary’s speech, but in case I’m not, you know why.

Update 1 – 9:06 PM: According to two Clinton aides, Senator Clinton will be in attendance for Obama’s Thursday night acceptance speech. This news comes a day after the WaPo reported that a number of “top Clinton advisers” would not be there.

Update 2 – 9:59 PM: I think it’s safe to say that, unlike Obama’s 2004 keynote which effectively launched his rise to stardom, Gov. Mark Warner’s (D-VA) keynote will barely be more than a footnote in history, if even that much. Zzz.

Here’s the rest of tonight’s line-up:

Update 4 – 10:38 PM: They’re showing the Hillary video now. Chelsea will be out afterwards to introduce her mother. FYI, Bubba will NOT be at Invesco field Thursday.

10:44 PM: Getting tons of applause. Biden, Michelle Obama standing and applauding as well. Fox is showing scenes of women crying on the convention floor.

10:48 PM: She’s giving one of the most wooden speeches I’ve ever heard. 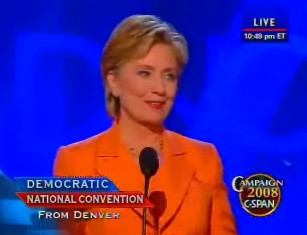 10:57 PM: Asks were her supporterse in it for her or for the people who need the Dems’ help (groan).

11:10 PM: Her speech is over. Bubba looks so happy he could cry. The Corner’s got some great – sometimes funny – commentary on Hillary’s speech. The Fox News panel is panning the speech.

Fred Barnes: “The best lines came from Harriet Tubman.” (Hillary quoted her in her speech)