Conventional wisdom has it that McCain did the “right thing” in pulling out of Michigan and moving his resources elsewhere (even though he shouldn’t have broadcast it), but new numbers out tonight suggest that may have been premature.

First, check out the last several polls that RCP has on Michigan: 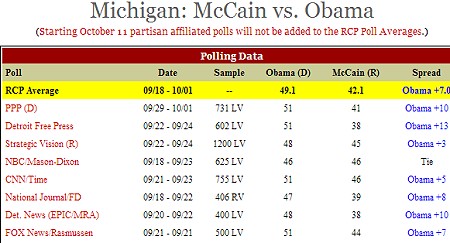 The first poll you see there is from PPP, which is a Democrat-based group showing BO up by 10. The poll before that, taken over a 9/22-24 is from Detroit Free Press and shows Mc down by 13. Strategic Vison, a Republican-based group, had Mc down by 3 on that same date. But new polling numbers out today, taken 10/1-4, show that Mc may still have a shot in MI:

LANSING, Mich. — With political insiders still reeling from last week’s announcement that Republican presidential candidate John McCain has withdrawn his campaign from Michigan, new polling data suggest the race is still too close to call. The latest poll from Denno-Noor, The Rossman Group and MIRS shows Barack Obama within statistical striking distance with only a 5 percent lead in Michigan over his Republican contender. McCain trails Obama with 39 percent support of Michigan’s likely voters compared to Obama’s 44 percent. Another 13 percent of voters remain undecided, while the rest plan on voting for one of the third party candidates on the ballot. “Michigan is still widely considered a battle ground state” said Kelly Rossman-McKinney, CEO of The Rossman Group. “For a major presidential contender to pull out when the numbers are this tight, it really begs the question â€“ what are you thinking â€“ or are you?”

Trying to pick up the slack left by the McCain campaign when they left Michigan is the conservative “Our Country Deserves Better” PAC, which is raising money so they can run ads like crazy in MI between now and election time to help defeat Barack Obama. If you’d like to donate a little to help them out, click here. They’ve done a good job so far, raising $250K of the $500K they’d like to have to run those ads in MI.

If the polling continues to be within five points, I suspect the RNC may run a few ads in MI as well.

One thing is getting more clear by the day: If poll trends continue, McCain is going to have to turn a blue state in order to win this election. Looks like Obama may flip CO and NM, and keep PA, and he’s doing much better in FL now than he had been. McCain needs to be able to hold on to what states Bush won. If he can’t hold on to NM and CO, he’ll need to pick up MI and another blue state, which is going to be tough.

One other thing: It’s easy to get discouraged right now with Obama having the edge in the national polling, and making significant gains in state polling, but please keep your chin up and don’t lose the will to continue fighting this. The way the media is reporting the news you’d think this race is already over – which is probably exactly what they want people to think, because if people think it’s already over they may not bother to show up.

Remember, this year it was going to be an uphill battle, no matter the Republican – especially considering the fact that if the economy became the focal point issue (which it has) it was going to favor the Democrat because McCain happens to be a Republican in the Bush administration, which has low approval ratings right now. “Guilt” by association and all that. In any event, please stay focused, stay strong, and never ever ever concede the battle until you know for sure one way or the other who the winner is next month.

9 Responses to "Did McCain pull out of Michigan too soon?"