Chris Matthews has renewed his contract with MSDNC:

Chris Matthews, the usually garrulous host of “Hardball” on MSNBC, has quietly signed a new long-term contract to remain with the cable network through the next election, signaling that he had quit entertaining any plans to run for a Senate seat.

The deal is for at least four years. Financial terms were not disclosed, and neither side would confirm whether MSNBC had won a reduction in salary for the host, as it had been reported to be seeking. Previous reports put his annual salary at about $5 million.

One executive involved in the negotiations said, “Whether he took a slight cut or got a slight raise, it’s nobody’s business.”

Phil Griffin, the president of MSNBC, said the deal would guarantee that Mr. Matthews would “be around to cover the next presidential election.” Mr. Matthews, known for his combative interviews, said he was happy to be staying on. “I love what I do,” he said. “It’s transparent. You can see it in my face.”

Yep. You sure can: 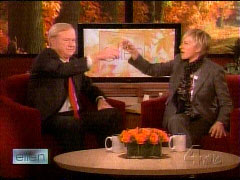 5 Responses to "Shocking news of the day"