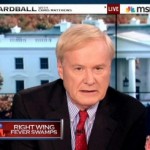 So, yeah. Like this kinda sorta happened last week in the aftermath of House Majority Leader Eric Cantor’s stunning GOP primary loss. Other sites caught onto it quickly but yours truly did not – better late than never:.....   [Read More]

A red-faced, positively outraged!!!-at-the-GOP-for-daring-to-hold-this-admin-accountable Chris Matthews throws the perfect pitch, and Sharpton, of course, hits the race card out of the ball park (via Greg Hengler):.....   [Read More]

This about sum’s up the nauseating tone of the fawning MSM coverage of our celebrity President’s second (and thank goodness – LAST) inaugural address today (via Eliana Johnson at NRO):.....   [Read More]

Got your barf bag handy? The AP did an (unsurprisingly) glowing puff piece on MSDNC’s chief angry man Chris Matthews – I’ll save you the trouble of reading the whole thing by providing you with the most mind-blowingly hilarious (but on the other hand, infuriating) excerpts (bolded emphasis added by me):.....   [Read More]

When last we left you on this issue President Obama, in a feeble attempt to come off as a heroic Alpha Male, went to the mat for Ambassador Susan Rice by essentially telling her critics (who he insinuated were all misogynistic males) to stop viewing her as an “easy target” and to come after him if they had issues with her Benghazi statements. It was a symbolic setback for real women’s rights, as the President in his insultingly paternalistic way more or less was saying, “Susan Rice is timid, sheltered woman and you need to leave her alone.” Yes, that’s exactly how he came across when talking about a key figure in his administration who many are suggesting may be nominated for the very important position of Secretary of State – a position that demands a strong backbone......   [Read More]