I swear, not a day goes by where some idiot far leftie is impugning conservative women by suggesting that they can’t possibly be “real women” simply because they don’t follow the rad-fem dogma on, among other things, the “absolute necessity” of abortion, the “rightness” of casual sex, and their absolute hatred for all males, in particular alpha males. As I’ve said before, if I had a dime for everytime I’d heard that I’d be a rich woman.

Most of the time when conservative women hear/read such repugnant remarks from pundits and politicos alike, they’re usually made by radical liberal women (case in point) who view women who don’t agree with them on “core” women’s issues as “traitors” to their sex. But every once in a while, an uber-liberal male will weigh in on the topic with his opinions, which are just as worthless as the “womyn” feminists who he worships. Case in point, the San Francisco Chronicle’s Mark Morford. JennQPublic reminds us of who this windbag is:

You might recognize Morford as the drooling Obama fetishist who proclaimed candidate Obama a “rare kind of attuned being” and a “Lightworker.” Or perhaps you remember his enlightened progressive description of “docile doormat” Laura Bush as “the ideal Republican wife: Prim, sexless, nearly useless, lets the men do the real thinkin.”

So really, who better to appoint himself this week’s Grand Arbiter of True Feminism?

Finding few reasons to gush about the Obama presidency, Morford’s current mission is to expose the “perverted kind of new womanhood” of Sarah Palin, Meg Whitman, and Nikki Haley. Ladies of the Left beware! warns Morford. The success of these “largely insufferable” conservative women comes packaged with a “s–bag of downsides, drawbacks, jackals and bitches.”

These, along with Meg “I’m a Billionaire!” Whitman and Nikki “Sarah Palin hugged me!” Haley, et al, are the apparent “champions” of a perverted kind of new womanhood, some sort of mutant breed who claim it’s entirely possible, even desirable to be “pro-life and pro-feminist,” which is a bit like saying you’re “pro-oil spill and pro-environment.”

In other words: Sorry, no. No f–ing way. This is the rule: You do not ever get to say you’re any kind of feminist or champion of women and mothers everywhere, and in the same breath add that you also believe no woman should have control over her reproductive powers and, by the way, poor immigrant women should be sent back to Mexico and guns should be legal for all.

Of course, such rhetoric matters not at all. This is the bad news: “Feminism” is right now dying a death of a thousand tiny wounds at the greasy hands (and tiny minds) of the Tea Party and the sneeringly misogynist Republican party, a new strain of semi-educated right-wing nutcase claiming all the revolutionary power of feminism, but none of that icky stuff known as “actual meaning.”

Now it’s women’s turn. Most women I know — powerful, independent, wondrously self-defined creatures of talent and intellect, sex and love, insight and intuition — are fully helping co-create the new female empowerment. But then they read about Sarah Palin endorsing Carly Fiorina with a wink and a rifle shot and a claim of “new” feminism, and they cringe straight down to their ovaries.

Think Morford’s bile offended readers of the SF Chron? The comments section there, which at the time of this writing has over 350 comments, mostly agree with him. Think liberal women will object to the way he described conservative women? Of course not. Read Jenn’s smackdown of Morford’s column where she has links to several “feminist” writers who essentially gave him a high five for trashing women who don’t agree with them, nor him. So much for the “sisterhood,” eh?

After reading Morford’s whinefest earlier this afternoon, I contemplated as to whether or not I’d even write a response, because everything I was thinking at the time was unsuitable for publishing on this blog. Instead of responding in that way, I’ve got another idea. I’m going to channel Morford and the “womyn” he so admires and write a short list of reasons “I’m not a real woman.” In no particular order, here goes.

I’m not a “real woman” because: 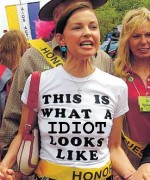 1. I don’t believe men are only interested in women because of their boobs, butt, and thighs.
2. I don’t believe most men would ever physically abuse/assualt/rape a woman.
3. I don’t believe that women should sleep with every man within walking distance simply because he’s “hot” and I’m “free.”
4. Unlike actress Ashley Judd, left, I don’t believe that sucking a baby out of a woman’s womb piece by piece simply because a woman wants to go to college before she becomes a mother is in any way acceptable (and yet they call me a radical!).
5. I don’t believe that there’s anything wrong with me accentuating my femininity and am unashamed of being a woman.
6. I don’t think there is anything whatsoever wrong with being a stay at home mother.
7. I believe that a woman should be married before she becomes pregnant (gasp!).
8. I’m unwilling to give any male politician oral sex simply because he supports a woman’s “right to choose.”
9. I believe my decisions are my personal responsibility, not the state’s.
10. I believe the woman is ultimately the more responsible party for birth control when it comes to “casual sex” because in the end it’s going to be her body which may bear the “fruits” of her union with her “man of the moment.”
11. I simply adore alpha males.
12. I in no way encourage infidelity for women.
13. I believe a woman should be defined by more than just her female parts.
14. I don’t believe in standing by a “pro-woman” President who has no respect for his marital vows simply because that President believes in abortion on demand.
15. I KNOW it’s not “all about me.”
16. I don’t think I have a “right” to walk around topless anywhere I want to.

I could go on and on, but you get the point.

Those reasons, and many more, are why jacka**es like Mark Morford don’t view women like me, JennQPublic, Dr. Melissa Clouthier, Tabitha Hale, and many other brilliant conservative women as “real women” and instead see us as “b*tches.” All I have to say is if those reasons equate to me not being a “real woman,” then I’ll proudly wear the label “pseudo-woman” for the rest of my life.

Oh, and guys, he didn’t spare you his wrath, either:

What do you make of it? As I say, men have endured similar lopsidedness, unfairness, egomania for ages. I personally wince a thousand times a day at all the lugnuts, NASCAR thugs, frat boys, wife-beaters, spitters, abusers, beer-bongers, sack tappers, popes, pastors, Glenn Becks, Adam Sandlers and Dick Cheneys I see slither across the newswires, men who work like demonslugs to make my entire gender look bad. And I’m sad to report, they’re often hugely successful.

I’m of the mindset that a few bad apples shouldn’t reflect badly on the whole bunch, but I’ll play by Morford’s “rules” for the next five minutes just for grins and giggles. Do you know what always gives me a chuckle? Everytime a radical feminist tells me that they can’t possibly “hate” men because they have a boyfriend or husband. But have you ever noticed that some of these guys are so brainwashed by the teachings of their radical feminist significant others that they are little more than subservient “yes men” who can’t think for themselves? Mind, I don’t think that most men who date or are married to radical feminist women are like this but certainly some of them are.

Mark Morford reminds me of these types of men. He despises alpha males, and equity feminists like myself disgust him. Traditional gender roles are alien concepts that he rejects. Apparently to jerks like Morford, “real” men are the types of men who vote for Socialists like Obama, hang Che flags on the wall, and help their “real women” burn their bras and have their tofu and green tea prepared for them when they return home on their bicycles to the straw eco-hut from their topless “anti-plastic bottle” campaigns. And when these “real men” aren’t doing that, they’re laying completely naked in the back of a van with the doors wide open, cupping themselves while drivers in the vehicles behind them on the freeway have no choice but to look on. Don’t believe me? Just check out his Twitter page (which I won’t link to, but you can Google).

Men on the Left have had it affirmed for them time and again that misogyny is perfectly acceptable – even desirable – as long as women on the Right are the targets. Even public rape fantasies about conservative women are excused. As long as these men are good little lefty foot soldiers, they’re welcome to direct all manner of misogyny toward women who fail to toe the line on abortion, gun control, and illegal immigration.

So, Mark. As long as we’re making up rules, here’s one for you: You do not ever get to create feminist litmus tests, and in the same breath call Sarah Palin, Nikki Haley, and others pseudo-women and bitches.

I think it’s clear who the real anti-feminist is.

Or anti-woman, rather than anti-feminist – if we’re going by Morford’s definition of “feminist” anyway.

And here it was I was hearing that it was conservative males whose method of operation was “objectifying conservative women” ..

24 Responses to "Channeling Mark Morford: A list of reasons I’m not a “real woman”"