From the administration that brought you “man-caused disaster” and “overseas contingency operation,” another terminology change is in the pipeline.

The White House wants the public to start using the term “global climate disruption” in place of “global warming” — fearing the latter term oversimplifies the problem and makes it sound less dangerous than it really is.

White House science adviser John Holdren urged people to start using the phrase during a speech last week in Oslo, echoing a plea he made three years earlier. Holdren said global warming is a “dangerous misnomer” for a problem far more complicated than a rise in temperature. 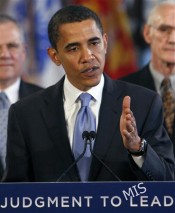 Hmph. That sure is funny, considering the term has “worked” magic for them for the last few decades in terms of it – and the agw crowd’s – ability to deliberately deceive millions of people. Wonder what changed? Oh, I know what it was: It was poll after poll after poll showing doubts about whether or not global warming is “man-made” and doubts about whether or not the government should make addressing the issue a “top priority.” The administration knows that people are finally waking up, thanks in part to scandals like ClimateGate and the various stories coming out of the woodwork about the fraudulent IPCC. So they’re wanting to play word games in hopes that they can dupe people all over again and reverse the cycle.

As I’ve said before, altering terminology and changing the definitions of words are some of the most dangerous games the left can play. It’s how they – with the help of the MSM – are able to deceive many, many people and turn them into uninformed, ignorant liberals. For example, think about how, for years, the left has controlled the debate on “women’s health issues.” The term “women’s health issues” is code for “abortion.” Talk to a pro-abortion leftist sometime and call them “pro-abortion.” Usually, they’ll angrily correct you by saying that they are “pro-choice.” They even hate the term “pro-life” and often instead use the term “anti-choice” instead. Think about the term “vegetative state.” When you think of someone who is in that condition in terms of a vegetable, it makes it a little less difficult to view them as less than human, therefore seemingly easing the life or death decisions family members must make in those situations. Another example: illegal immigrants are “undocumented workers” or “undocumented citizens.”

These people know what they are doing when they literally change the terms of the debate. They know if they called “women’s issues” what they really were, which is “abortion” – aka the termination of an innocent unborn life, or if they called “PVS” something other than something having to do with being like a vegetable, they’d never gain any traction. So they reframe debates by using the phony, dressed-up, sometimes emotive terms they think will best persuade voters and politicos to their side of the argument. And once they do, they control both the debate – and the government agenda locally, statewide, and nationally.

In the case of “global warming” and the desire of the Obama administration to now characterize it as “global climate disruption,” it’s not so much that “global warming” is a more apt description of what’s happening, it’s that more and more people have had an awakening on the issue over the last few years and no longer see it as a priority issue, with some even doubting that the science is “settled” (heretics!) so the administration is having to shift gears and try to shift momentum back in their favor. This administration, and other movers and shakers on the left in general, will never ever waste an opportunity to use any means necessary, including highly deceptive tactics, in order to “win” the debate. It’s shameless, and we must call it out whenever we see it.