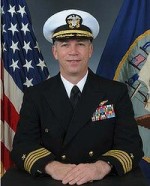 Just got done reading the spirited comments to Ed Morrissey’s post at Hot Air on the news that the Navy has relieved Commander Owen Honors of command in light of “racy videos” which apparently show varying degrees of simulated sex acts and alleged gay slurs, among other things (I can’t comment too much on the videos – I haven’t watched them). The comments at HA overwhelming support Owens, and decry what they feel as a dangerous culture of political correctness permeating through the military, adversely affecting morale and hurting distinguished careers. Some speculate that, considering the videos are four years old, Owens might be being deliberately targeted by someone who has a grudge and who doesn’t want to see him promoted. Others opined that it was perfect timing for the videos after the repeal of DADT.

I’m interested in your thoughts, especially if you’ve served in the military. My general thoughts on DADT have been mixed for sometime. Unlike with gay marriage, which I strongly oppose for reasons mentioned here (hint, left wingers: it has nothing to do with “hate”), DADT has always struck me as bad policy because it meant that qualified gay men and women could serve in the military — they just couldn’t talk about it, unlike heterosexuals, who could. Not only that, but in pondering the issue on the whole, I support – in general – anyone, male, female, white, black, straight, or gay who is willing to put their lives on the line for their country. They shouldn’t have their medals stripped or be discharged from the military on the basis of sexual orientation.

BUT … and you knew this was coming … my concern with gays serving “openly’ in the military were and are the same as the concerns many had and still have with women serving in the military in terms of the “political correctness” factor. The military is a pretty rough and tumble place, and some of the types of humor and ways to relieve boredom and stress are not necessarily ways that are fit for civilian consumption – workplace or otherwise. That is not a positive or negative assessment. It’s just a statement of fact. The military is one of those places where I’ve always considered that you need to be able to “roll with the punches.” That doesn’t mean “roll with sexual harassment”; it means “have a thick skin” or “man up”, including being able to recognize when the sexual jokes and off-color humor actually equates to real harassment, not just “offense.” You are going to see and hear things that you won’t always like, but think long and hard before you label it “harassment.” The word “harassment” – especially when used in conjuction with “sexual” – has been so watered down that it means almost anything these days, whether you’re in the military or not. Being “offended” does not equate to “being harassed”, contra to our PC politicos and their allies MSM. Military grunts make fun of everyone, not just one particular group – heck, they make fun of themselves! – and if you can’t handle ribbing, you definitely shouldn’t sign on for the military, because you’ll be faced with a lot worse things than ribbing should you be called to serve in a combat role. Not only that, but from the comments I read at Hot Air and elsewhere, the videos were pretty tame in comparison to what many sailors and soldiers have heard and seen over the years in the name of stress relief as part of the rough and tumble culture that is the military.

No doubt, in the military – as has been the case in other fields – real, bonafide, no-question-about-it sexual harassment has happened, and it’s despicable and should be dealt with swiftly and justly. But at the same time, you being offended by something sexual in nature does not automatically mean that you’ve been “sexually harassed.” I can’t speak in specifics in terms for what exactly constitutes sexual harassment in the military, but did you know that here stateside it’s considered sexual harassment if a shop employee has a revealing poster of a woman posted at his station, and a female co-worker happens to walk by and notice it and become “offended”? Some sexual “harassment” is based on nothing more than the feelings of someone else. A guy compliments a co-worker’s new hairdo. A female walks by the break table and hears her male colleagues discussing their weekend “conquests,” etc. These are things *I* have heard, and in the case of the former, I smiled and in the latter I just rolled my eyes. Sadly, there are other women who would consider that harassment.

Yes, I know that what was in the videos was supposedly much more controversial than my civilian examples, but my point on a more general level is that “harassment” and “offense” are not the same thing. There’s also something to be said for “poor taste.” If the videos are how others described them, perhaps Commander Owens should have been reprimanded. But relieved of command? Many are arguing that’s way too harsh for what the Commander was trying to do, which was, according to the accounts of many in attendance, to boost morale using off-color attempts at humor by making fun of, well, just about everyone. Was anyone offended by the videos? I’m sure they were, but from what I’ve read about them they don’t rise to the level of “sexual harassment.” Sexual harassment, to me, has always been about a) the suggestion by a superior that you’d lose your job if you didn’t peform “favors”, and 2) unwanted touching and/or crude commentary repeatedly directed at you in the workplace, regardless of your requests to stop. I guess I’m old school like that.

Anyway, that’s my expanded .02. Your thoughts?

12 Responses to "Commander Honors relieved of command – PLUS: My un-PC thoughts on sexual harassment"