The Freedom of Information Act strikes the Obama WH (via Memeorandum):

Judicial Watch, the public interest group that investigates and prosecutes government corruption, announced today that it has uncovered documents from the Obama Department of Treasury showing that the Obama administration, contrary to its repeated denials, attempted to exclude the Fox News Channel (FNC) from a round of interviews with Treasury’s “Executive Pay Czar” Kenneth Feinberg. The documents, which include email exchanges within the Department of the Treasury and between Treasury and White House staff, also provide colorful evidence of an anti-Fox News bias within the Obama White House.

The documents, obtained last week by Judicial Watch pursuant to an October, 28, 2009, Freedom of Information Act (FOIA) request, concern a series of interviews with Feinberg, who served as the Special Master for the Troubled Asset Relief Program (TARP) Executive Compensation, on October 22, 2009, organized by the Treasury Department. According to press reports, the Fox News Channel was specifically excluded from joining the pool of reporters which precipitated a backlash among the networks and a reversal by the Obama Treasury Department.

According to The New York Times: “Fox’s television news competitors refused to go along with a Treasury Department effort on Thursday [October 22, 2009] to exclude Fox from a round of interviews with the executive-pay czar Kenneth R. Feinberg that was to be conducted with a ‘pool’ camera crew…”. Fox News Channel’s James Rosen reported this backlash forced the Obama administration to reconsider its position on the matter: “The Washington bureau chiefs of the five TV news network consulted and decided that none of them would interview Feinberg unless Fox was included, and the administration relented…,” reported Rosen. Ultimately, after other media representatives objected, Fox News Channel was allowed to participate in the interviews.

Regarding general anti-FNC bias within the Obama White House in an October 23, 2009, email exchange between Jennifer Psaki, Deputy White House Communications Director and LeCompte, Psaki writes, “I am putting some dead fish in the fox cubby – just cause”. In an email on the night of October 22, 2009, commenting on a report by Fox News Channel anchor Bret Baier noting the exclusion of the network from the pool, Psaki writes to Compte and fellow White House colleagues, “…brett baier just did a stupid piece on it — but he is a lunatic”.

The Treasury Department blacked out a key email regarding its refusal to make available Treasury Secretary Geithner for an interview on Fox News Sunday with Chris Wallace.

“The Obama administration seems to have lied about its attempt to exclude Fox News Channel from access to an interview with the ‘pay czar.’ These documents show there is a pervasive anti-Fox bias in the Obama White House,” said Judicial Watch President Tom Fitton. “The juvenile Mafioso-talk in these emails has no place in any White House. For the Obama administration to purposely exclude a major news organization from access to information has troubling First Amendment implications.” 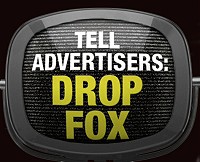 It’s one thing for an administration to have its “preferred” networks which they select for television and print interviews – I can’t remember the last White House that didn’t do this (the Bush administration, for example, had a preference for Fox and this administration has an admitted preference for MSDNC), but it’s another thing entirely to complete exclude a major news media outlet from a press briefing where all major news outlets are invited but them.   You know it had to be bad when the even the Obama-friendly press strongly objected to the exclusion of Fox News from that Treasury briefing.  The silence of the “Ususal Suspects” on the left regarding this outrageous near-First Amendment violation was  unsurprising at the time, but we all know how they would have flipped a lid if the Bush administration had ever attempted anything like that.

Has the Obama administration’s war on Fox News been a secret? Of course not, but here’s a flashback of a few noteworthy reported instances of this administration either openly declaring war on Fox or demanding that liberal commentators pull back from appearing on Fox:

1) In October 2009, not even a full year into his administration, then-Obama chief advisor David Axelrod admitted to former Clintonista and then-ABC News This Week host George Stephanopoulos his strategy for targeting Fox.  Then-WH Chief of Staff Rahmbo Emanuel admitted similarly to CNN.  RCP’s Tom Bevan wrote at the time:

The White House’s direct attack on FOX News is only part of the strategy. As Axelrod and Emanuel made clear yesterday, they also want to drive a wedge between the rest of the media and FOX News, enlisting other television networks in the effort to paint FOX News as illegitimate.

Emanuel suggested the same to John King later in their interview: “And more importantly is not have the CNN’s and others in the world basically be led and following FOX, as if what they’re trying to do is a legitimate news organization, in the sense of both sides and a sense of valued opinion.”

Then-WH Communications Director Anita Dunn echoed similar sentiments in an interview she did with CNN that same month.

2.  In spite of the so-called  “truce” reached between the WH and Fox News later that October, it was revealed just a few weeks later how the WH was strong-arming liberal commentators from appearing on the network. Peter Nicholas at the Chi-Trib’s Swamp Politics blog wrote at the time:

At least one Democratic political strategist has gotten a blunt warning from the White House to never appear on Fox News Channel, an outlet that presidential aides have depicted as not so much a news-gathering operation as a political opponent bent on damaging the Obama administration.

Political consultants are a staple of cable television talk shows, analyzing current events based on their own experiences working on campaigns or in government.

One Democratic strategist said that shortly after an appearance on Fox he got a phone call from a White House official telling him not to be a guest on the show again. The call had an intimidating tone, he said.

The message was, “We better not see you on again,” said the strategist, who spoke on condition of anonymity so as not to run afoul of the White House. An implicit suggestion, he said, was that “clients might stop using you if you continue.”

In urging Democratic consultants to spurn Fox, White House officials might be trying to isolate the network and make it appear more partisan.

White House Communications Director Anita Dunn said Thursday night that she had checked with colleagues who “deal with TV issues” and they had not told people to avoid Fox. On the contrary, they had urged people to appear on the network, Dunn wrote in an email.

But Patrick Caddell, a Fox News contributor and a former pollster for Democratic President Jimmy Carter, said he has spoken to Democratic consultants who have been told by the White House to avoid appearances on Fox. He declined to give their names.

Caddell said he had not gotten that message himself from the White House. “They know better than to tell me anything like that,” he said.

Caddell added: “I have heard that they’ve done that to others in not too subtle ways. I find it appalling. When the White House gets in the business of suppressing dissent and comment, particularly from its own party, it hurts itself.”

All of this just points back to something we’ve all known about this President from the early days of his candidacy for the President – something my co-blogger reaffirmed earlier today in a must-read post: That Barack Obama is intolerable of criticism to the point of pouting, shouting, cursing, and whining when he doesn’t get his way – and when press coverage of him isn’t 100% glowing, he and his administration go through great lengths to punish the one network that doesn’t salivate over his every move 95% of the time.

About the only thing shocking I got out of the Judicial Watch report was the administration’s criticism of Bret Baier.  Bret Baier?  He’s not even an opinion guy at Fox – never has been, yet WH critics called him a “lunatic.”  I suspect this is because the story itself reported by Baier was probably critical of the Obama administration, even though Baier himself is not an opinion show host. I can see the WH’s dislike of Hannity, Beck, and some of the other opinion show hosts on Fox, but to suggest Bret Baier – a straight news reporter if there ever was one – is a “lunatic” just shows you how deeply this WH hates Fox, and how entrenched the “anti-criticism” sentiment is within the administration.  They not only have zero tolerance for the opinion line up, but even the straight news reporting earns Fox News a juvenile thumbs-down.

How Nixonian this all is.

In fact, that not just this administration, but that also big-liberal-name-funded organizations like Media Matters and Think Progress devote so much of their time to “bringing down Fox” shows as well the embedded liberal intolerance for non-sanctioned opposing viewpoints and critical news reporting of their beloved “leaders.”

And yet we’re the ones who supposedly “hate dissent.” Go figure …

Phineas butts in: Obama showed his intolerance for dissent, criticism, and free speech back during the ’08 campaign. Anyone remember the “Missouri Truth Squads?” Too bad more people weren’t watching.