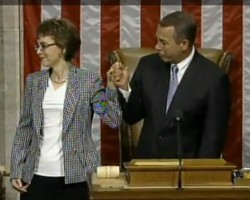 Today, Rep. Gabrielle Giffords formally submitted her resignation from the US House to House Speaker John Boehner in front of an emotional, tearful Congress (letter here). In her resignation letter (and in a video released this past weekend), Giffords promised to keep working for the people of Arizona while continuing on the road to recovery.

I’m like millions of other Americans who have paid close attention to the benchmarks in her road back to a normal life, have laughed and cried at the ups and downs, and have prayed for the best possible outcome for her. No matter what party you’re in nor the political differences, you can’t help but be touched at her courage, spirit, and determination, considering what she went through. At our core, we are not Republicans or Democrats, conservative or liberals but instead human beings – God’s children, and because of that it’s in our DNA to root for the good guys (and gals).

I have to admit I’ve been very disappointed, and at times disgusted with the way some in Ms. Giffords’ party have used the Tucson tragedy for shameless political gain/advantage, most notably DNC Chair Debbie Wasserman Schultz, who is a good friend of Giffords’ and her read Giffords’ resignation letter on the House floor today. The despicable use of this tragedy to one up the opposition started literally within seconds of the reporting of what happened, and it’s never really let up. Myths about the motivations of the shooter/murderer still persist in the fevered minds of rabid partisans like Schultz. I thoroughly enjoyed Diane Sawyer’s special on Giffords’ recovery right up until the point Sawyer “went there” via her narration of the events of the time the shootings took place by leaving open the possibility that the shooter, Jared Loughner, was motivated by so-called “violent Tea Party rhetoric” when it’s been proven over and over again that wasn’t the case. I was annoyed to hear that Giffords’ husband Mark Kelly wrote in his book on Gabby about how Boehner never visited Giffords in the immediate aftermath of the shootings, suggesting that maybe Boehner took it to heart when Giffords jokingly suggested to him one time to “stay out of my district.” I understand the need to get things off your chest, but including it in the book came across as nakedly political to me, and it left a sour taste in my mouth.

Even with all that said, I know how to “rise above” and put that to the side when it comes to Giffords herself. I didn’t (and don’t) agree with all her political positions but from what I’ve read about her she was someone anyone left or right could like personally. Her story is one that inspires people to do something with their lives, and also makes people who sit around feeling sorry for themselves think “hey, maybe I don’t have it so bad.” You just can’t help but to want her to do well in life and to make a full recovery (she sounds like she’s well on her way, too!).

So, best wishes, Rep. Giffords. Hopefully the best of your life has yet to come, and is just right around the corner. God bless you.

6 Responses to "Wishing Gabby Giffords all the best"