NOTE: I originally titled this post as Toure being a “26 year-old MAN” but changed it to “ADULT” after my friend Bill Hobbs re-emphasized the point that a real man would not have done to his child what he advocated. 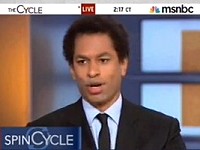 I wanted to follow up on the post I wrote this past weekend about how MSDNC’s Cycle host Toure came out of the closet – so to speak – on the issue of abortion by “explaining” how his “not the one” girlfriend having an abortion 15 years ago probably “saved” his life.  In the post, I had assumed Toure, from the way he was talking, was in his mid to late teens, at the very latest very early 20s when the “incident” happened.  I had to assume because when I Googled for the information, I couldn’t even find his Wiki page.

Anyway, I found out today. Toure wasn’t some immature high school kid or college party dude.   Not saying that would have excused the poor decisions he and his then-g/f made but it would have spoken to maturity levels – or lack thereof. Instead, he was a 26 year old ADULT MALE when he and his “not the one” girlfriend made the “mistake” they did by having sex without using protection, getting pregnant as a result.    He was born in March 1971, per his Wiki page, and that puts him at almost 42 years old.  15 years ago would put him at 26 years old when everything happened.

IOW, he was no spring chicken.  He was a grown man.  He damn well knew the birds and the bees at that point in his life and still decided to have unprotected sex, knowing what the consequences would be. So as a result of his (and his “not the one” girlfriend’s) selfish and careless disregard for personal responsibility as ADULTS, an innocent unborn child had to die.   This makes the moral bankruptcy of both Toure’s actions all those  years ago and his “bold statement” from this past Friday all the deeper.

Just thought you should know.