Trigger warnings, safe spaces, rape culture, gamergate, etc. isn't about protecting anyones bubble, it's about making everyone else shut up. 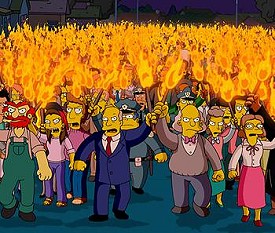 I don’t get the chance to blog as much as I used to, but today I felt compelled to write after months of reading feminists launch ridiculous nationwide movements decrying America’s so-called “rape culture”, a culture they – get this – say “promotes” the belief that rape is “acceptable” and should be tolerated. Feminists have even gone so far as to accuse those in favor (gasp!) of due process for college men accused of sexual assaults of being “pro-rape”, while at the same time suggesting that the “default” position for anyone listening to a woman accuse a man of rape is to believe it without question. In other words, guilty until proven innocent. The accuser should be given the benefit of the doubt without hesitation, while the accused should be punished in the court of public opinion before he has a chance to make his case at trial.

Last I checked, this wasn’t how the system was supposed to work.

The latest “rape culture” grenade thrown by feminists is over the HBO hit series Game of Thrones. From the Associated Press:

LOS ANGELES (AP) – A U.S. senator is among those condemning a rape scene on HBO’s “Game of Thrones.”

In a comment tweeted Tuesday, Sen. Claire McCaskill described the sexual assault as “gratuitous” and “disgusting.” The Democratic lawmaker from Missouri said she was done with the show.

Others critics included the website The Mary Sue, which offers a feminist view of pop culture. The website posted that it would no longer promote “Game of Thrones” and said that rape is not a device to drive a story.

HBO declined comment Tuesday on the reaction to the episode that debuted last Sunday. An after-hours call to McCaskill’s office seeking further comment was not immediately returned.

The attack involved newly married characters Sansa, played by Sophie Turner, and Ramsay, portrayed by Iwan Rheon. Ramsay’s rape of Sansa was off-camera, suggested in her cries and the distress on a bystander’s face.

Sidenote: Incredibly amusing that the self-important Senator from Missouri couldn’t be bothered to tweet her comments about the “offensive” episode until a full 24 hours or more after the outrage started. Can you say “bandwagon”, anyone? But I digress.

I confess: I don’t watch the show. I don’t have HBO. I’m not sure I’d watch it even if I did. But I find all the pearl-clutching over this episode to be embarrassing for women, as if we’re supposed to be delicate little snowflakes who should be shielded from the realities of… fictional rape. It happens. It’s been used as a “plot device” in books, TV shows, and movies for as long as those mediums have existed and, in the case of GoT, my understanding from fans who are both viewers of the shows and readers of the books, what’s depicted on HBO (which has included incestuous rape and penis-severing) is actually a very sanitized version of what takes place in the books – and that includes the various rapes that have been shown to “shocked” feminist viewers.

None of us have to wait for answers to these questions because it’s hiding in plain sight: Feminists and their ilk have become the modern-day thought police, using a combination of shame tactics, obedient group-think, and mindless mob-rule to shut down dissent. Noah C. Rothman described this in a brilliant piece yesterday at Commentary Magazine:

….The mechanisms through which the vulnerable are shielded from discomforting thought develop over the course of decades. The process often begins imperceptibly, but the trained eye can see it in its nascent stages. It is the application of that perspective that renders Missouri Democratic Sen. Claire McCaskill’s ostensibly fatuous and self-serving condemnation of Game of Thrones so dangerous.

This casual admonition would be easily dismissed if running afoul of the ever-evolving concepts of social justice did not have dire career consequences for the accused. Livelihoods have been lost for offending the sensibilities of the left’s culture warriors, even years after the supposed offense has occurred.

And not only have livelihoods been lost by some for daring to be different, for daring to challenge left wing “social justice” narratives, but college life for some young men (falsely*) accused of sexual assault without the benefit of a trial have been one giant experience in humiliation, degradation, and ostracization via wars waged upon them by self-serving left wing “culture warriors” who are really no more than modern day digital/verbal lynch mob types who need no evidence whatsoever before publicly convicting a man based on nothing more than preconceived notions and prejudices. And if you dare see some merit to the arguments of the accused? The mob then becomes relentless.

It’s frightening, really, when you think about it. Our country has “been there” before on this disturbing and dangerous type of mentality, and it’s extremely troubling to see it rear its ugly head again, even if in a much different modern form. Fortunately, it’s the 21st century, and there are various platforms in existence now that help question narratives and facts, and shine sunlight on people, places, things – and accusations – that seem suspect, much to the dismay of self-designated enforcers who have taken it upon themselves to be the arbiters of what we should think, feel, believe, watch, do.

For people calling themselves “progressives”, I find their tactics rather regressive – in many ways, and in effect they’ve become the types of activists which they claim to abhor. Don’t you think?

*For more on questionable rape accusations and outright rape hoaxes, make sure to read Washington Examiner commentator Ashe Schow, and follow her on Twitter.

8 Responses to "Shutuppery: The true agenda behind feminists & their “rape culture” culture"