Lady character in my first real attempt at a spiritual book: a shy woman of strong faith who gets mixed up with the wrong guy at the right time. Just so happens the guy is a non-believer who wears it on his sleeve – to the point of being obnoxious about it, but oddly finds that he enjoys being around the irritating Ms. Wholesome. Like many women, the main female character eventually comes to see Mr. Wrong’s non-belief as a worthy challenge .. while she’s falling for him, of course......   [Read More] 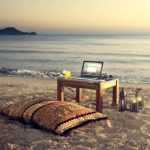 On vacations, you’re supposed to COMPLETELY get away and stop thinking about work stuff, but if you simply MUST check in at the office, I highly recommend setting up a little something like this:.....   [Read More]

It’s funny. When I first started writing when I was in my early teens, I didn’t think of myself as an artist. I had this image in my head of a frustrated painter furiously working his canvass. Even though years later I learned that painters weren’t the only people who could be classified as artists – and that writers, too, were considered as such, I still never considered myself one......   [Read More] 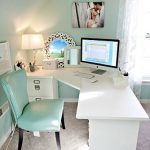 Redesign your home office – or create a new one. The pictures in this post (found on Pinterest) will amaze you! Before and after shots of a spare bedroom converted into a lovely home office space. Here’s my favorite:.....   [Read More] 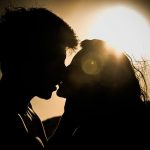 Her eyes flutter; his eyes assess
Her cheeks pinken; his cheeks dimple
Her hand strokes his face; his itch to explore.....   [Read More]

Being 20 pages into one re-write and then deciding that the storyline needs to be changed around to a significant degree in order to be able to add better character backstories. Sucks when you have several halfway decent scenes already written that you want to try and incorporate into the new storyline but can’t. *SIGH* .....   [Read More]