El Maestro of hypocrisy himself told a labor group today that he would ask American’s to give up their SUVs:

“I think Americans are actually willing to sacrifice” Edwards said during a forum held by the International Association of Machinists and Aerospace Workers. “One of the things they should be asked to do is drive more fuel efficient vehicles.”

The former North Carolina senator was asked specifically if he would tell them to give up their SUVS, he said, “Yes.”

Certainly, Senator. Right after you give up yours: 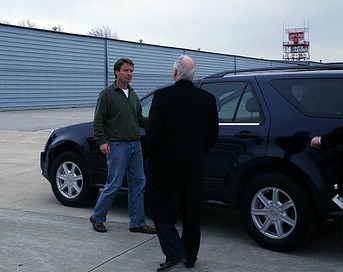 Photo courtesy of Ben Smith at The Politico, who has more on Edwards – and other Dem candidates’ – SUV hypocrisy:

But campaigning turns out to be a pretty high-carbon practice. All the candidates ride around, particularly in Iowa, in big cars — Hillary rode an 18-wheeler; Obama rented an RV; and Edwards, whose convoy is often mini-van centric, had this Cadillac SRX Crossover (15 mpg) beside him in Iowa on his arrival from announcing his candidacy for president in New Orleans, according to his Flickr stream.

Actually, Edwards isn’t anti-SUV — he seems to be quite consciously avoiding the trap of appearing to demand that Americans drive only Trabants. His spokesman says he drives a hybrid SUV, the Ford Escape, at home in North Carolina, though the AP reported in April that the family has an SUV and a small truck as well.

His website says, “Edwards believes that everyone should be able to drive the car, truck or SUV of their choice and still enjoy high fuel economy.”

“John Edwards believes that all Americans need to be patriotic about something other than war, and that means conserving at home, at work, and in the cars they drive. And that includes the Edwards family. They drive a hybrid Ford Escape, but they also still own a Chrysler Pacifica â€“ which they use less often. He is reducing his own impact on global warming by driving a hybrid, building an energy-efficient home, and subsidizing renewable energy to offset the carbon emissions of his home, vehicles, and his campaign.”

ROTFL. And just how many SUVs can you count around the Edwards estate?

Edwards sounds like he’s channeling the Goracle, who pleaded in his Academy Award winning global warming crock-, er, documentary for people to conserve and sacrifice in order to save our planet, even though he himself wasn’t and hasn’t exactly been doing his part to help.

Nor are many of his loyal supporters (scroll).

And Senator Dianne Feinstein. And Ahhhnold.

Astute Blogger has had enough of the Dem double talk:

I’d like leftists to STFU – for the common good.

Well, I doubt they’ll do that – but they should at least consider buying some more of those “carbon credits” to offset their frequent bursts of hypocrisy

14 Responses to "John Edwards to Americans: You should give up your SUV"