With Senator Obama now being he clear frontrunner for the Democratic nomination for president, and talk of Hillary dropping out of the race blazes across the blogosphere, now more than ever the junior Senator from Illinois deserves intense scrutiny.

I have written on numerous occasions about Senator Obama and noted that how he is portrayed in the press, by the liberal punditocracy, his supporters, and sometimes himself, is at odds with who he really is and what he stands for. I’ve noted that in spite of the myth that he is a “moderate” “bring people together” type of candidate, in actuality he is a solid liberal, always has been and always will be, and one who leaves little room for compromise. Contrary to he message he wants to send out to voters that he is a political “outsider,” he’s very much an insider. Just because you haven’t actually spent a whole lot of time in Washington doesn’t mean you don’t know how to play the political game, and he has a track record to show for it.

In April, he redefined the word “violence” with a bizarre series of ‘updated’ definitions, which are documented here. His idea of making a political statement is refusing to wear a US flag pin. His speeches are not as “inspirational” as some of his his cult-like followers spin them out to be: Back in February, the man who wants to be Commander in Chief of our armed forces said that troop deaths in Iraq were “wasted” deaths, strongly implying that our troops had given their lives for a lie.

On the foreign policy front, Obama’s lack of experience is extremely worrisome: In an attempt to appeal to his party’s rabid anti-war wing, Obama stated in a July Democratic debate that he would “unconditionally” meet with some of the world’s most despotic “leaders” – sworn enemies of the United States – in an attempt to be diplomatic. In a blatant attempt at showing off his “tough guy” credentials, which in reality don’t exist, he threatened to invade War On Terror ally Pakistan. When pressed on his foreign policy experience, he admitted last month that his foreign policy credentials were based on the four years he spent overseas … as a child.

Just this past weekend, he stupidly asserted that the significant reduction in violence taking place in Iraq was happening as the result of Democrats taking control of Congress in 2006, because, in his view, Sunnis got scared that the US would pull out with Congress under Dem “leadership” and as a result, decided to change their tunes.

But worst of all, he declared back in July that the strong probability of genocide happening in Iraq should US troops be withdrawn before the mission is complete was not a reason to keep them there.

Yesterday, San Diego Tribune editor Robert J. Caldwell made similar points about Obama, and added on much more (h/t: Betsy Newmark). Give Obama his due for the way he’s run his campaign, Caldwell said, but his record is troublesome:

Obama is still the presidential contender with a one-page resume. The Illinois state legislature and half of one term in the U.S. Senate is scant preparation to be president of the United States. In his brief Senate tenure, Obama has no legislative accomplishments, mainly because for most of that short time he’s been running for president.

Whatever one’s views on Iraq strategy and homefront support, these vacillations on a war in progress don’t inspire confidence; in Obama’s judgment, his grasp of Iraq realities and his constancy of purpose. Whatever this is, it isn’t leadership.

All of this betrays Obama’s lack of experience; a glaring deficiency that should be raising profound questions about his qualifications and fitness, at least now, for the presidency.

Then there’s the disturbing disconnect between Obama’s carefully crafted persona as a unifier and a supposed “trans-ideological” agent of change, and his actual record in office.

What’s troubling, however, is that Obama’s record doesn’t match his reassuring persona.

The liberal Americans for Democratic Action rates Obama’s voting record in the Senate at 97.5 percent, near perfection for liberal Democrats. The American Conservative Union, the ADA’s ideological opposite, rates Obama’s voting record at a rock-bottom 8 percent. Both ratings leave no doubt that Obama’s actual votes mark him as a traditionally liberal Democrat, not a moderate.

Obama’s record also raises another disturbing matter â€“ his penchant for ducking tough issues. In the Illinois Legislature, Obama compiled a record of voting “present” on controversial and politically explosive bills. However politically convenient, this isn’t leadership. Obama’s three years in the U.S. Senate are similarly devoid of any leadership examples on legislation of consequence.

This doesn’t necessarily indict Obama’s claimed leadership skills as fraudulent. It does demonstrate that those skills have not yet been in evidence in his legislative work. That’s a curious, and worrying, fact.

Cataloguing the doubts about Obama isn’t nitpicking or partisanship. It’s the sort of scrutiny every presidential candidate should get. This is information that every voter deserves, and should want before making fateful decisions about this country’s future.

Since Obama’s big win on Thursday night, I’ve been hearing and reading comments from conservatives who are asserting that if they “had” to have a Democrat for president, they’d like it to be Obama, because he doesn’t appear to be divisive and would reach out to the other side of the aisle in the spirit of bipartisanship. This is naive thinking. The only “reaching out” an Obama administration would do is reach out to get moderate Republicans on board with his administration’s liberal ideas on issues like socialized healthcare and Iraq. And with what will likely still be a Democratic Congress (with perhaps even larger majorities) once the 2008 elections are over, he’ll only have to reach out to a few moderate Rs in the House and Senate in order to easily advance his liberal agenda. 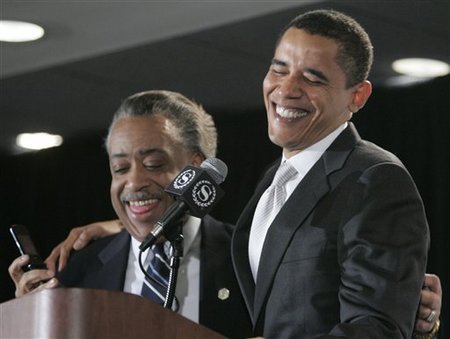 He’s got friends in low places.

We can’t make the mistake of confusing likability with substance. Senator Barack Obama is a Democrat that no Republican should be comfortable seeing sit in the big chair in the White House, especially not right in the middle of a war on terror he is unwilling to wage effectively.