It’s day three of the DNC in Denver, and there is lots to report, but first, the usual obligatory first links. Here’s a link to tonight’s schedule. The biggies, of course, will be Bubba making his big speech at 9. Obama’s VP pick Joe Biden will make his speech at 10:30 (Eastern time for both). As always, you can watch everything as it happens on C-SPAN if you can’t watch it on TV.

—– The roll call just concluded after Hillary Clinton spoke for the NY delegation by moving to select the nominee by acclamation. Nancy Pelosi announced the results, and Barack Obama is now officially the Democrat nominee for president. Here’s Hillary, making the motion: 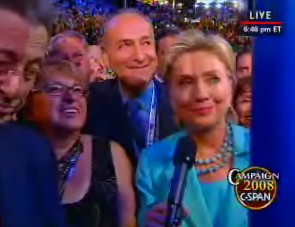 —– As you can imagine, the Barack Obama “temple” story has got a lot of people talking, and some people trying to say “bbbbut Bush!” Unfortunately, one of those people is a writer I respect highly: Ben Smith at The Politico. He writes:

Republicans who are mocking Obama’s appearance haven’t mentioned it, but George W. Bush accepted his own nomination in 2004 on a set with a similar neoclassical theme, with columns rising on either side of him, as the pictures above and below show.

Indeed, the Bush set and the Obama sets currently look strikingly similar, with the podium set well in front of the columns, and connected by a path.

“Strikingly similar”? Here’s one of the photos he presents as “evidence”: 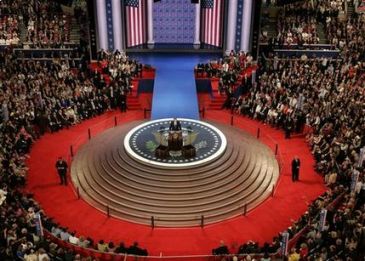 A couple of things. For starters, the Bush set clearly looks like the front of a capital building oh, like, say the White House. Secondly, what position did Bush hold in 2004? President. IOW, he wasn’t trying to look like he was president before he actually was elected president. A fairer comparison would be to take a look at the RNC’s 2000 stage, when Bush was nominated for his first term. Scroll down to the bottom of this page for a photo of the stage. I don’t see any Greek columns at all. You?

Now, let’s take a look at the photo of Obama’s temple again:

I’m seeing eight, maybe nine columns in that photo, which resembles the Parthenon (except there was no arch in the Parthenon).

I should add that I wouldn’t have an issue with Obama using columns on his set if he was already president. There are buildings all over this country with numerous Greek-looking columns. But clearly, Obama’s going the symbolism route as he has always done during this campaign, like he did with the faux presidential seal, the phoney ‘diplomatic’ trip to Europe and the Middle East, and much more. It’s What He Does.

Ben Smith, with all due respect, needs to take a big gulp of the Get Real Juice, methinks. And judging by their response to the criticism, so should the Obama campaign.

—– Bad news for Obama? A new Gallup poll shows conservative Democrats “peeling away from Barry Oh!,” and it also shows that he is losing support from moderate and liberal Republicans. Maybe come November there won’t be nearly as many “Obamacans” as he likes to imply there are.

—– The WaPo reports that some diehard Clintonistas are saying that Hillary’s speech last night did not heal the divisions within the Dem party. Ok, a show of hands (or comments) on how many people think enough Hillary supporters are going to either not vote for BO or vote for McCain to the point that it will make a difference in the outcome. I think in the end, their desire to have a Democrat back in the WH will override their “principled” stand on Hillary’s failed attempt at winning the nomination.

—– She may not have won it this year, but Michael Barone thinks that Hillary’s speech was a nice start what he believes will be her 2012 run for president. Hmmm.

—– Last but not least, newly released Annenberg Foundation project files show the Barack Obama’s relationship with unrepentant domestic terrorist Bill Ayers is not just one of a “neighbor” he has implied in the past he barely knows. The evidence continues to stack up against Obama on this issue. National Review wrote a scathing piece today on Obama’s association with Ayers that should be considered a must-read.

I’ll be back in a bit to do some light liveblogging of Bubba and Biden.

Update 1 – 9:00 PM: Bubba will be up to speak in the next few minutes. C-SPAN just flashed to some celebs in the crowd, like Jennifer Garner and Jessica Alba. 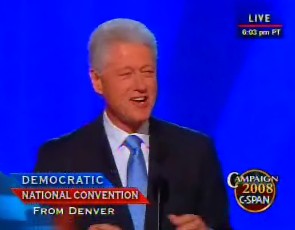 Gives more praise in his opening remarks for Biden than Obama.

9:12 PM: This speech is more lackluster than most Bubba speeches. It’s like he is going through the motions.

9:25 PM: The speech is over. He will not get the rave reviews Hillary got. It’s going to be widely panned, I’m betting. He’s clearly still bitter over how Obama tried to paint him as a racist, and tried to paint the “wonderful Clinton economy days” as a mirage.

Kerry will speak probably around 9:35 PM.

9:45 PM: Was that Obama’s grandfather Kerry just intro’d? I had the TV on mute.

Update 3 – 10:21 PM: Biden is now officially the VP nominee, and will be speaking shortly after his son Beau (the AG of DE) introduces him. The DNC video shows Obama touting Biden’s foreign policy creds.

He’s talking about Biden’s fatherly qualities (I admit, it’s touching). Painting him as a Washington outsider. 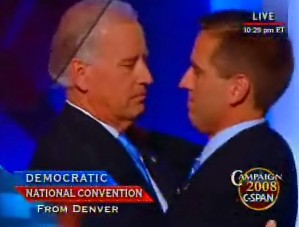 Says he’s honored to be in the country with the greatest warriors in the world. Not many clapped.

10:37 PM: I keep looking at the stage and thinking he should be the Dem nominee. I cannot believe the Democrats nominated someone with so little experience as Barack Obama.

10:43 PM: Barack Obama is an angel that will heal the world. Blah blah.

“John McCain is my friend.”

Starts the talking points on McCain.

10:50 PM: Ribbing McCain on Afghanistan, and says because McCain said Afghanistan was succeeding three years ago and because Obama has called for more troops in Afgh that Obama has better judgment. But what has Obama done about Afghanistan, Senator Biden?

Says we should talk to Iran like Obama suggests.

Biden’s logic is so warped. Says because US and Iraq are on the verge of making an agreement on withdrawing troops from Iraq, that it supposedly proves that Obama was right about withdrawal and McCain was wrong. Uh – what about the surge, Senator Biden? You know the one that made it possible for us to start talking about withdrawal? The one Obama opposed and said recently he would still oppose if he had it to do all over again?

“Finally, baRACK is back in Denver!” Oh wait, I’m getting my programs mixed up 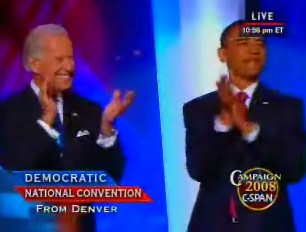 Joe Biden talked about what a good friend he is to John McCain. But then came this: “These times require more than a good soldier, they require a wise leader.” I thought that was pretty disgusting, frankly. It could be interpreted to mean, “McCain may be good enough to go be a grunt and endure torture — but he’s not smart enough for leadership.” Well, leave it to McCain to deal with his friend.

Fred Barnes on the Fox panel noted how the man whose judgement Biden was dissing tonight was the same man he said he’d be honored to run with in 2005.

Nina Easton says Biden is in no position to talk about judgement considering he voted against the 1st Gulf War.

11:20 PM: Last update of the night: MM has a good liveblog of Biden’s speech and points out some places he was wrong or flip flopped.

It takes a minute to load, so please be patient. I’ll try to find a YouTube link to it tomorrow.

And for those of you who missed it, here’s the video of Bill Clinton’s speech. Let me know if you think he came off as wooden and scripted as I did.