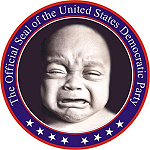 Earlier today I blogged about liberal hypocrites, and mentioned in my post that John Edwards had surrundered to the Nutroots in backing out of a scheduled Dem presidential candidate debate in Nevada because the debate was going to be co-hosted by Fox News.

In the last few weeks, the Nutroots had launched a campaign against the Nevada Dems’ agreement to have Fox co-host the show due to a list of ‘concerns’ about Fox’s bias, as well as made a list of demands that no network should have been required to meet. To recap:

* Many Democrats will want to watch or listen to the debate without supporting the FOX News Channel.

* There was a desire to include a panelist from a more progressive outlet, such as Air America, to ensure balance at the questioners table.

* There was also a desire to bolster a progressive media outlet, such as Air America or Politics TV that could use the opportunity to grow its constituency.

We will also offer PolitcsTV.com the ability to carry the live FOX News web cast feed on its site for one-time viewing. If PoliticsTV agrees, this will give national viewers who do not wish to watch FOX the ability to watch the debate live while bolstering a progressive leaning organization.

Edwards was the first to pull out of the debate, then NM governor Bill Richardson and then …

… lo and behold, the Nevada Democratic party have nixed the entire debate due to those ‘concerns’:

The Nevada State Democratic Party is pulling out of a controversial presidential debate scheduled for Aug. 14 in Reno and co-hosted by Fox News, according to Democratic insiders.

The debate was being hosted by Fox News Channel and Fox News Radio, the Nevada State Democratic Party and the Western Majority Project.

A Fox spokeswoman didn’t immediately return a call for comment.

Former North Carolina Sen. John Edwards said Wednesday he would not participate in the debate, citing Fox’s conservative ties as a factor. His deputy campaign manager, Jonathan Prince, sent an e-mail to the liberal website DailyKos, which was posted on the site.

“We’re definitely going to debate in Nevada, but we don’t see why this needs to be one of them” it read.

The state party has been under pressure from progressive activists across the country to cut its ties with the debate. The liberal group MoveOn.org has been leading an effort to persuade the Nevada party to boycott the Fox News-hosted debate.

According to MoveOn, more than 265,000 people signed a petition sent to the Nevada State Democratic Party. The organization launched a website — http://foxattacks.com/ — as part of its campaign.

I can see the eventual 2008 Dem nominee now at the Democratic National Convention as they take the podium and announce (while saluting): “I’m your Kossak candidate, reporting for duty.” The theme song for the convention would be:

FOX NEWS OFFICIAL STATEMENT 9:15PM EST: ‘News organizations will want to think twice before getting involved in the Nevada Democratic Caucus which appears to be controlled by radical fringe out-of-state interest groups, not the Nevada Democratic Party. In the past, Moveon.org has said they â€˜own’ the Democratic party — while most Democrats don’t agree with that, it’s clearly the case in Nevada’ — David Rhodes, VP…

“Recently pressure groups are forcing candidates to conclude that the best strategy for journalists is divide and conquer, to only appear on those networks and venues that give them favorable coverage.

There’s a long tradition of news organizations, national and local, sometimes together, sponsoring presidential and other candidate debates. The organizations and the panelists have been the objects of a lot of advice and even pressure as to how these debates should be conducted and what questions should be asked. This pressure has been successfully resisted, but it’s being tried again this year with the added wrinkle that candidates are being asked to boycott debates because certain groups wants to approve the sponsoring organizations.

The public knows if a journalist’s question is unfair. They also know if a candidate is impeding freedom of speech and free press. If you are afraid of journalists, how will you face the real dangers in the world?”

11 Responses to "About that Dem debate in Nevada … (MORE: FOX NEWS ISSUES STATEMENT)"