The saga is over.

Rosie O’Donnell will not be returning to “The View.”

In a statement today, Brian Frons, the president of Disney-ABC’s Daytime Television Group, said, “We had hoped that Rosie would be with us until the end of her contract three weeks from now, but Rosie has informed us that she would like an early leave. Therefore, we part ways, thank her for her tremendous contribution to ‘The View’ and wish her well.”

Barbara Walters, the show’s creator and co-executive producer, said, “I brought Rosie to the show. Rosie contributed to one of our most exciting and successful years at ‘The View.’ I am most appreciative. Our close and affectionate relationship will not change.”

In her statement, O’Donnell said, “I’m extremely grateful. It’s been an amazing year and I love all three women.”

And on her Web site Thursday, O’Donnell wrote: “When painting there is a point u must step away from the canvas as the work is done.”

O’Donnell announced at the end of April she was leaving “The View,” and her last day was supposed to be June 20.

And I think we all know why she left a few weeks early. Can’t take being challenged on your troop-hating comments, can you, Ro?

That she has the audacity to claim that she ‘supports the troops” after saying stuff like “655,000 Iraqi civilians have died. Who are the terrorists?” is just a testament to how hopelessly clueless she really is.

Oh, and look at what Rosie’s chief writer was caught doing on Wednesday after the blowout between RO and Elisabeth:

Yesterday, Rosie’s chief writer, Janette Barber, was allegedly escorted from the building after she was caught drawing moustaches on photographs of Hasselbeck that hang in the “View” studios.

The Post’s Adam Buckman reports ABC confirmed in a statement only that “photographs at ‘The View’s’ offices were defaced. Rosie O’Donnell was not in the building. ABC Legal and Human Resources are investigating the matter.” Barber is an old friend of O’Donnell who worked with her years ago on “The Rosie O’Donnell Show.”

There were also rumors O’Donnell was so angry after her argument with Hasselbeck that she trashed her dressing room, although ABC denied the tantrum.

I swear, Rosie and her little entourage so epitomize the modern left, don’t they? Can’t stand being challenged to the point they fly into a foaming at the mouth frenzy and have temper tantrums that would make the 5 year old screaming in a rage about his mom’s unwillingness to buy him a candy bar look like a paragon of maturity. It’s their way or the highway, buster!

In any event, none of us will be sad that Rosie is gone, although I will admit that one thing I will miss is having Rosie on TV each day as a classic representative of what the mainstream left has become. As I wrote last month:

If it does turn out to be true that she’s leaving the show, I’ll probably be one of the few who will miss her being on there. Not because I like her, but because in my opinion Rosie is the face of today’s left, what with her various conspiracy theories about 9-11, thinking BushCo. is out to steal everyone’s rights, believing that the US is the bigger terrorist than Al Qaeda â€¦ these are things so many on the left believe – and even though it’s something we see on the Nutroot blogs often, rarely do we get such a candid everyday view of how far left Democrats have gone that we get with Rosie O. Sure, we can see Harry Reid and others on CSPAN, but – sadly – people don’t pay as much attention to politicians as they do celebrities, and the more celebrity moonbats like Rosie O. speak out, the more people can judge for themselves how wacked out the left has become.

Gateway Pundit writes: “Our long national nightmare is over!”

Media Research takes a look back at some of Rosie’s more controversial moments on The View (via Justin McCarthy at Newsbusters). 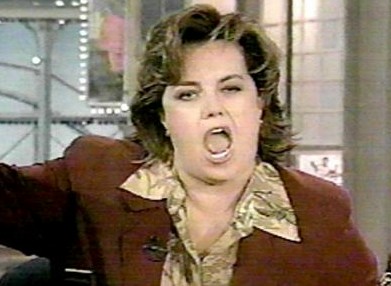 Too bad. So sad. Buhbye.

Last but certainly not least, check out Mary Katharine Ham’s “Week in Peeps” where she takes a little dig at, among others, Rosie O