Democratic National Committee Chairman Howard Dean came out for inclusive team prayers in public schools while speaking Sunday to a gathering of thousands of Jewish leaders, according to a leading Jewish news agency.

In another statement likely to stir debate among the evangelical Christians his party is urgently trying to court, Dean also asserted “there are no bars to heaven for anybody” according to the report by JTA, a 90-year-old non-profit organization which calls itself “the global news service of the Jewish people.”

The remarks in Nashville, Tenn., come at a time when Democratic candidates in general â€“ and the DNC in particular â€“ have been increasing outreach to voters for whom faith and values is a decisive issue.

A DNC official said the chairman was saying that “Democrats, unlike the Republicans, are an inclusive party, respectful of all people, and he said that prayer in public settings should reflect that.” The official said Dean’s comment about prayer was “not that you can or can’t use Jesus’ name â€“ he was not that specific at all.” The bulk of Dean’s remarks were devoted to “the power that people have to make a change when they work together” the official said

The news agency said Dean made the remarks to 3,500 Jewish leaders at the opening plenary session of the annual General Assembly of the United Jewish Communities which the group calls “the largest annual gathering of Jewish leadership in the world.”

The report said Dean’s comments followed an address by the University of Tennessee’s head basketball coach, Bruce Pearl, who told the crowd that as a Jewish student in public schools, he always felt uncomfortable when he was playing sports and his team’s pre-game prayers would end with an invocation to Jesus.

“This country is not a theocracy,” Dean said, according to JTA. “There are fundamental differences between the Republican Party and the Democratic Party. The Democratic Party believes that everybody in this room ought to be comfortable being an American Jew, not just an American; that there are no bars to heaven for anybody; that we are not a one-religion nation; and that no child or member of a football team ought to be able to cringe at the last line of a prayer before going onto the field.”

Here, Dean demonstrates the ignorance that totally consumes the Democratic party on matters of faith. What I wrote in my post on Barack Obama’s attempts at pandering to black Christians – attempts which backfired, as I noted in that post – bears repeating here, I think, since we are talking about what’s acceptable and unacceptable to God:

Usually when I argue against things like gay marriage, I don’t use religious arguments against it for a couple of reasons: 1) because religious arguments against homosexuality (aka “God said so”) can’t (and shouldn’t) be used as a justification for the government to ban gay marriage and 2) because it’s not really necessary, as cogent secular arguments can and have been made against gay marriage. That said, whenever I hear anyone from a liberal gay group try to twist the word of God into one of “tolerance” for sinners (whether they be gay, adulterers, or whatever) the only way to counter those arguments is to remind them that God is not a tolerant God, because if He was, there would be no such thing as sin, no such thing as right and wrong. Things would just “be.” God is, in fact, very intolerant of sin, which is one of the reasons you hear so many preachers talk on Sundays about “judgement day.” There can be no judgement day if nothing is to be judged.

I wrote the following back in August over the flap regarding the church in Texas that cancelled a memorial service for an Iraq war veteran once they found out the family wanted to turn the service into a celebration of the gay lifestyle, and I think it bears repeating now:

“Church memorials are not supposed to honor sinful lifestyles, no matter the sin. High Point Church did the right thing here – it showed the compassion and selflessness that is such a huge part of being a Christian. But it wasn’t â€˜bigoted’ or â€˜hateful’ – their decision was based on Bible teachings, and in a pc age where they had to have known that their decison was going to raise a lot of eyebrows in liberal Christian churches and media outlets looking for an angle, I’d say it was a brave decison to make.

This doesn’t compute with liberal gay groups because they believe that secular tolerance should also exist in the non-secular world. What they also don’t understand is that no matter how many laws they can change by their militant campaigns in the secular world as it relates to “gay rights” they cannot change the word of God. It is what it is. And it expressly condemns sin, and one of those sins includes homosexuality.

That argument also applies to Dean’s “there are no bars to heaven for anybody” woefully misinformed comment. To liberal churchgoers like him, there is no right or wrong, and God is not a judgmental God, but instead a tolerant one. This is secular wishful thinking – and it’s dangerous (to them). The mentality is: Go on and do whatever you want to do, and in the end, God will still welcome you into heaven! Wrong, wrong, wrong. Informed believers know that in order for a Christian to make it past the pearly gates they must accept the Lord into their heart as their saviour, ask forgiveness for their sins, and pledge to live their lives according to God’s word. This is not Sister Toldjah “claiming” this – any Bible-believing preacher will tell you the same thing.

As a Christian, I pray that churchgoers like Howard Dean will one day see the light and learn to be able to effectively separate their secular beliefs from the non-secular. But as a citizen of this country, I sometimes wish liberal Christians like Howard Dean would take the advice the Spanish king gave to Chavez and shut up rather than make themselves look stupid. It’s bad enough that they get so much wrong on the political front, which in turn confuses and misleads the electorate. But when they do so on the religious front, it leads to spiritual confusion, which – in my view – is far more devastating. 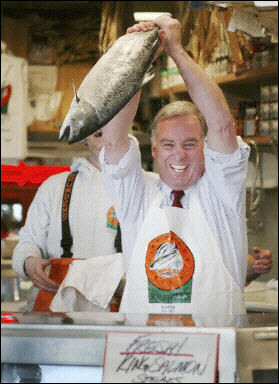 A reverend you ain’t, Howie.

Update: Marc Moore at The Van Der GaliÃ«n Gazette wraps up the argument with this succinct comment:

Prayer without a purpose is just hot air, which is also very like Howard Dean. Why bother?

12 Responses to "Howard Dean plays God, says “there are no bars to heaven for anybody”"