This afternoon I went to one of the local libraries here to pick up an actual ticket to tomorrow night’s Obama rally. Yeah, I got the e-ticket, but it was not a standard ticket. Usually when you get a ticket in your email there is an attachment to it that includes the ticket. Apparently with this one the email is your ticket. I wanted to be sure that I didn’t encounter any barriers to getting in with my email ticket so I figured it was better to be safe than sorry, and decided to visit a ticket table in order to have an actual ticket in hand.

While I was standing in line waiting to get my ticket, I noticed the crowd that was standing outside the library, taking advantage of early voting, which started April 17th (over 110,000 have been cast so far). 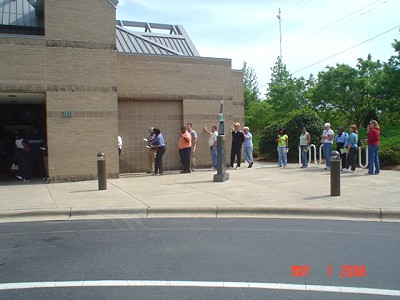 That may not look like a lot, but the University City library is big, and the last time I went there and they had early voting going on, the booths were middle ways of the library, so a line outside means a long line inside, and this was at roughly 4 pm on a weekday. By most accounts, turnout for early voting has been its highest ever here, so expect a record turnout next week when voters go to the polls here in the Tarheel state.

I briefly chatted with a couple of Obama supporters while waiting in line – one who had just gotten her tickets and the young gal who was giving them out. Nothing earth-shattering to report. Like the others in the crowd, they both appeared to be eager and enthusiastic supporters for BO. The gal giving out the tickets was wearing an “Obama mama” T-shirt that had Obama’s likeness in between the words “Obama” and “mama.”

And speaking of the Obamessiah, recent polls taken indicate the Rev. Wright controversy is causing him to lose ground here in NC – and nationwide. First up, via WRAL:

Raleigh, N.C. — It is an exciting time for North Carolina voters. For the first time in decades, they have a say in the Democratic primary for president.

Mason-Dixon Polling & Research Inc. surveyed 400 likely Democratic voters Monday and Tuesday. The results show Obama with a 7 point lead over Clinton, with 9 percent undecided. The poll has a margin of error of 5 percentage points.

McLennan said Obama’s former pastor, Rev. Jeremiah Wright, is dragging down the Illinois senator. Wright has made comments such as suggesting that the AIDS virus was invented by the government to destroy “people of color.”

“It is a media-driven story. Wright is very controversial. He makes controversial statements. He gets people fired up, but it’s not one of the top issues in the polls” McLennan said.

And another other poll, conducted by Insider Advantage, actually gives Clinton a 2 point lead in NC. However, Marc Ambinder notes that even the Clinton campaign is skeptical of this poll, considering the breakdown of the participants. Even at that, all indicators are that Obama’s momentum has stalled (read more on that via Memeo).

Has the Obama campaign run out of gas? Captain Ed wrote earlier today that the candidate himself seems like he has. He looks battle-weary, to be sure, but he’s still got enough steam left to appear on the Late Show with David Letterman and to continue to make the rounds here in NC with just a few days left before the primary.

The Clinton campaign announced yesterday that she would be in NC on Friday and Saturday. Her Friday appearance will be at Guilford College in Greensboro. She and Obama will both be appearing at the Jefferson-Jackson dinner (an official Dem party event) in Raleigh Friday night. La Clinton will be in Winston-Salem on Saturday, and Bubba will be canvassing the state on Sunday.