“Were they handing out free granola?”

— Blogs of War, responding to the news reports that between 65,000 and 75,000 people were on hand for an Obama rally in Oregon on Sunday. 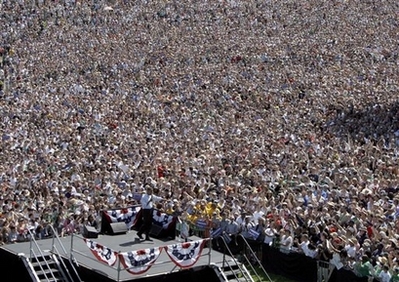 Personally, I think distributing smelling salts to the masses would have been the far more humanitarian thing to do …

AJ Strata has more on some of what the O-man said at the rally, including Obama’s global warming warnings, and what an Obama administration will not allow – like continuing to drive SUVs and leaving the thermostats in our homes set at 72, etc.

Give up SUVs? Wait til his hypocrite buddy John Edwards gets the news.

Obama himself switched from a gas guzzling V8 Hemi-powered Chrysler 300C to a hybrid SUV for personal use only in the last year, although it’s apparently a different story while on the campaign trail. I should note that he made the switch from gas guzzler to fuel efficient vehicle about a month after he made his “courageous” speech to Detroit business leaders and auto executives.

11 Responses to "Question of the day"