… this seems extreme for a top presidential candidate to be doing: 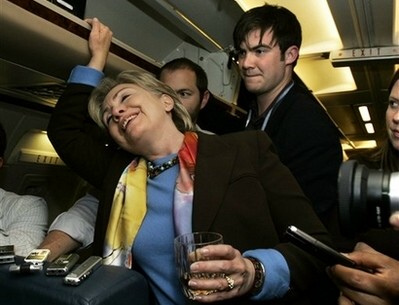 Caption: Democratic presidential hopeful Sen. Hillary Rodham Clinton, D-N.Y., jokes around with reporters on her campaign plane prior to takeoff from the airport in Rapid City, S.D., Wednesday, May 28, 2008. (AP Photo/Elise Amendola)

This Is London has the story:

Hillary Clinton took time out from her punishing campaign schedule to enjoy a glass of whiskey with a group of journalists.

The Democratic presidential hopeful was flying back from Rapid City in South Dakota, one of the few states yet to hold its primary when she decided to let her hair down a little.

Her relaxed mood may give rise to speculation she is preparing to concede to her Democratic rival Barak [sic] Obama.

She certainly hasn’t been sounding like she’ll be conceding anytime soon, but that photo (and others like it) definitely makes you wonder if she realizes that her campaign has hit the end of the road.