FLINT, Mich. – Al Gore announced his endorsement of Barack Obama Monday and promised to help the Democrat achieve what eluded him — the presidency. In a letter to be e-mailed to Obama supporters, the former vice president and Nobel Prize winner wrote, “From now through Election Day, I intend to do whatever I can to make sure he is elected president of the United States.”

Gore is one of the most popular figures in the Democratic Party, but he maintained a low profile in the primary campaign. He’s planning to appear with Obama at a rally in Detroit Monday night.

It’s the second time that Obama has rolled out a major endorsement in Michigan, a state he did not campaign in during the primary because its election violated the party rules. Obama is counting on a win in Michigan in November, but brought Gore and 2004 vice presidential nominee John Edwards to help validate him among Democrats in the state after skipping their primary.

“It means a lot, obviously,” Obama said of Gore’s support, as he greeted workers outside the General Motors Flint Engine South plant. “He’s somebody who is a visionary, not just for the party, but for the country.”

“Over the past 18 months, Barack Obama has united a movement. He knows change does not come from 1600 Pennsylvania Avenue or Capitol Hill. It begins when people stand up and take action,” Gore wrote. “With the help of millions of supporters like you, Barack Obama will bring the change we so desperately need in order to solve our country’s most pressing problems.”

Wonder if this endorsement has anything to do with the suggestion a couple of months ago by Obama that he’d love to have Gore play a “major role” in his administration? You know The Goracle – he never does anything unless it benefits him personally.

Ah well. At least he waited to give his endorsement when he knew he couldn’t screw it up, unlike in late 2003 …

More I: I had no idea The Goracle had his own blog – you can read his official endorsement of Obama here.

More II: Oh, what the heck! How about another round of “Caption This”? 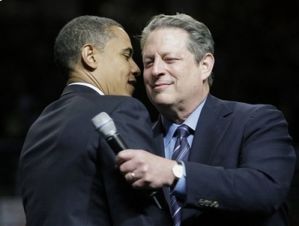