CNN’s been caught before displaying a pro-Cuba/Castro bias, and now they’ve been caught again, this time over the news that Elian Gonzalez, once a young boy caught in the middle of an international custody dispute, has joined Cuba’s Young Communist Union. First, here’s the CBS report:

CBS News correspondent Kelly Cobiella reports Elian has spent the past eight years living in Cuba with his father, now a member of the Cuban National Assembly. His “American” home is a museum today. Relatives have moved on and rarely talk to the media.

Cobiella reports that many in south Florida’s exile community see the boy’s acceptance into the Communist Party as proof he has grown into Fidel Castro’s pawn and propaganda tool.

“He’s been using Elian as a needle in the side of free democratic loving Cuban exiles,” says Cuban-American Marc Smit, “and he’s going to continue using that.”

Elian was one of 18-thousand young Cubans officially inducted into the party last weekend. The communist youth newspaper, Juventud Rebelde, quoted the 14-year-old as saying he would never let down ex-President Fidel Castro or his brother, Raul. 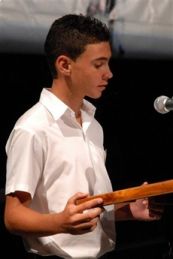 George Moneo at the Babalu blog has additional info:

He received his ID card, and praise from Miriam Yanet MartÃ­n, the president of the OrganizaciÃ³n de Pioneros “JosÃ© MartÃ­,” who said that Elian’s membership is of “great symbolic importance” for the “Cuban family and reminded all that after Elian’s return, fidel castro (his “dad”) gave instructions to Elian’s professors make him a “model boy.” I bet Greg Craig, Janet Reno and Bubba are all aquiver about this.

Now, how does CNN spin this story? Matthew Balan at Newsbusters has the details:

Correspondent Shasta Darlington reported on Monday’s “American Morning” that the newly-minted communist “vowed he would always follow the examples of Fidel Castro and his brother, Raul, Cuba’s new president.” She also acknowledged unquestioningly Fidel Castro’s “personal relationship” with the boy.

Darlington, reporting live from Havana, introduced her report by announcing that Elian took his “first step that, for a select few, lead to a bright political future in Cuba.” She then gave a short summary of the custody dispute over the child eight years ago, during which she stated that “Fidel Castro himself led the ideological battle to bring Gonzalez back to Cuba and his father.”

The CNN correspondent also ran archival video of a younger Elian, dressed in the uniform of the communist “club” for younger children, the “JosÃ© MartÃ­ Pioneer Organization,” thanking “my family and the Cuban people and Commander Fidel” for his return to Cuba.

On the issue of Castro’s “personal relationship” with the 14-year-old, Darlington reported that “[t]he aging president attended the young boy’s birthday on more than one occasion. At this party, he helped him blow out the candles.” She then concluded, “With those credentials, for most Cubans, it comes as no surprise that Elian Gonzalez joined the ranks of those young people who [are] most committed to Fidel Castro’s revolution.”

“American Morning” co-host Kiran Chetry, on her first day back from maternal leave, then asked Darlington, “And how common is it to join this young communist organization?” She replied, “Well, it’s not entirely exclusive. This year, for example, there were 18,000 young people. But then again, not everyone does it, and it does show a certain commitment to the revolution and to the party that not all youngsters have. ”

Again, just as the AP failed to do, neither Darlington nor Chetry asked skeptically whether Gonzalez actually had the choice to join the Young Communist League, or whether if he actually was “committed to Fidel Castro’s revolution.”

You know, perhaps we should cut CNN a little slack. After all, what’s a few years of disinformation if it means they get to keep their beloved Havana bureau? And hey, it’s not like they haven’t done it before elsewhere …

Related: And if this doesn’t give you the warm fuzzies, I don’t know what will (h/t: ST reader GWR).