Seeking to beat back reports of a continuing rift, the Obama campaign announced today that Sen. Barack Obama (D-Ill.) and former President Bill Clinton have talked by phone.

Obama campaign spokesman Bill Burton said: “Senator Obama had a terrific conversation with President Clinton and is honored to have his support in this campaign. He has always believed that Bill Clinton is one of this nation’s great leaders and most brilliant minds, and looks forward to seeing him on the campaign trail and receiving his counsel in the months to come.”

Bill Clinton spokesman Matt McKenna said in a statement, “President Clinton had a very good conversation with Senator Obama today. He renewed his offer to do whatever he can to ensure Senator Obama is our next President.

“President Clinton continues to be impressed by Senator Obama and the campaign he has run, and looks forward to campaigning for and with him in the months to come. The President believes that Senator Obama has been a great inspiration for millions of people around the country, and he knows that he will bring the change America needs as our next President.”

Well, um, considering this story, I guess I should say, “what a difference a few days makes”:

Mr Obama is expected to speak to Mr Clinton for the first time since he won the nomination in the next few days, but campaign insiders say that the former president’s future campaign role is a “sticking point” in peace talks with Mrs Clinton’s aides.

The Telegraph has learned that the former president’s rage is still so great that even loyal allies are shocked by his patronising attitude to Mr Obama, and believe that he risks damaging his own reputation by his intransigence.

A senior Democrat who worked for Mr Clinton has revealed that he recently told friends Mr Obama could “kiss my ass” in return for his support.

A second source said that the former president has kept his distance because he still does not believe Mr Obama can win the election.

Mr Clinton last week issued a tepid statement, through a spokesman, in which he said he “is obviously committed to doing whatever he can and is asked to do to ensure Senator Obama is the next president of the United States “.

It has long been known that Mr Clinton is angry at the way his own reputation was tarnished during the primary battle when several of his comments were interpreted as racist.

But his lingering fury has shocked his friends. The Democrat told the Telegraph: “He’s been angry for a while. But everyone thought he would get over it. He hasn’t. I’ve spoken to a couple of people who he’s been in contact with and he is mad as hell.

With that in mind, it will be interesting to see when/if Obama and Bubba actually do end up doing some campaigning together:

Obama spokesman Robert Gibbs said the senator called Clinton after Obama landed in Missouri Monday morning, and they spoke for about 20 minutes. Gibbs said Obama asked Clinton to campaign with him and separately.

“I believe he’s excited to do it” Gibbs told reporters traveling with Obama.

LOL. Give Gibbs an Academy Award for putting on a good front. I seriously doubt the Bubbster is looking forward to it, and probably will only be able to put on a warmer front than Hillary Clinton did at her first post-primary appearance with the O-man last week because Bill Clinton is such a master of deception. He’ll say and do just about anything to get his mug in front of the camera, even if it means kissing the ring of the young upstart who has, for all intents and purposes, just wrested the reigns of the party out of his and his wife’s hands. 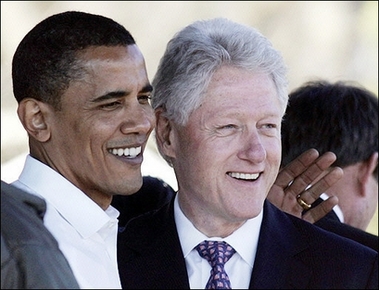