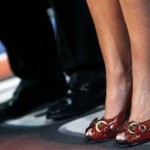 Memeorandum is bursting at the seams this morning, with many posts there from the left expressing ‘concern’ as to the vetting process behind McCain’s choice of Gov. Sarah Palin for a VP running mate.Â  To make it short, they believe McCain didn’t vet her at all and chose her strictly on the basis that she’s a woman.Â Â  As you have probably already surmised by now, this is just one more lameÂ attempt by the left at claiming/implying thatÂ Gov. Palin isÂ unqualified to be aÂ  heartbeat away from the presidency.

It’s barely been 72 hours since McCain announced Palin as his choice for his veep nominee and alreadyÂ Gov. Palin has been viciously attacked by the same bunch who would be calling bothÂ her and her life story the epitome of the American dream … if she happened to be a Democrat (update: Here’s more on that, via MM).Â  But, as I’ve noted before, the left – in particular the far left – hates strong conservative Christian women, and that is a majorÂ factor behind the gutter vitriol we’ve seen coming from the likes of the Daily Kos for the last three days.Â  But the more time I’ve had to think about it, the more I realize there’s another strong factor in all this as well.

The left have only had two Democrats in the WH in the last 30 years, Carter and Clinton.Â  They despise the “warmongering” George W. Bush, and see this year and the celebrity-esque Barack Obama as their big chance at finally taking back the WH again.Â  They were lukewarm for Kerry, but they are orgasmic about Obama.Â Â  Because Obama is so well liked amongst the elites in Washington, DC, in the media, and inÂ  Hollywood, and by at least 17 million people in this country who voted for him in the primaries,Â it’s supposed to be a given that he’ll win in November.Â

But even before the announcement of Gov. Palin, McCain was keeping it close with Obama.Â Â  Even at that, though, the conservative base wasn’t very enthusiastic about McCain.Â  Most had vowed to hold their noses and vote for him in the fall, while some stated flat out that they weren’t going to vote for what they viewed as another less than mediocre choice for president.Â Â Â  Liberals have been counting on a percentage of the conservative base either sitting out the election, or perhaps even voting for Bob Barr or even Obama – they know it wouldn’t have been a huge percentage, but as tight as things are, they know even a few percentage points would make all the difference in the world in key states.

Enter into the race Gov. Sarah Palin, and all of that changes.Â  Suddenly you have conservatives across the country energetic, enthused, pumped up and ready to rumble – and all of them willing to defend Gov. Palin’s honor.Â  Many conservatives are donating to McCain for the first time in this election.Â  The numbers don’t lie: $47 million for the month of August, $10 million since announcing Gov. Palin as his running mate.Â  It’s been his best fundraising month since he threw his hat into the ring for president.

Sensing a serious threat to their best hope at winning back the WH, the left has launched the types of attacks we’ve seen this past weekend: Â She was picked because she was a woman, she wasn’t vetted throroughly, she’s an unfit mother,Â she should stay at home and watch over her kids, Alaska is a “small state” and thus governing it is not a great indicator of Gov. Palin’s executive experience, “Troopergate” shows she’s just another power abuser just like W and Cheney, she was just a small town mayor, she “flip flopped” on the Bridge to Nowhere (not), she’s a ‘hypocrite’ for ‘allowing’ her daughter to get pregnant even though she’s a strong proponent of family values, she’s “hot” and someone they’d like to *edit* but that’s about it, etc.

But beyond the low road attacks are the ones about Gov. Palin’s judgement and readiness to lead.Â  Excuse me, but I will take no lectures and no browbeatingÂ from anyone on the left about judgement and readiness to lead, considering the fact that the person they willingly and enthusiastically voted for to be their nominee is someone whose judgement is sorely lacking, when you consider that he launched his political career at the home of an unrepentant terrorist, schmoozed with the Rezkos and the Daleys of Chicago throughout his time in the IL State Senate, whose first 6 years of his 8 year career in the Il. State Senate saw him accomplish nothing, whose two of three years served in the US Senate has been spent campaigning for president rather than being a Senator of his own state.

By contrast, Gov. Palin has had to manage an entire state, including its budget, itsÂ employees, its operation -Â including dealing with one of the biggest issues confronting the United States today: whether or not to drill in ANWR.Â  The left’s claims that Alaska is just a “small state” are laughable, when you consider that the state of Delaware, home to Senator Joe Biden, only has about 200,000 more people than Alaska and that Deleware is geographically smaller than Alaska.Â  Not only that, but Joe Biden doesn’t govern the whole state – he represents it in DC.Â  What burning issues has Joe Biden had to confront being the Senator from DE, hmmm?Â Â What issuesÂ does Deleware deal with that wouldÂ impact the entire country?Â  What is Joe Biden’s record on reform?

By choosing Gov. Palin, John McCain has sent a signal to the country – and to Barack Obama – that when he talks about change in Washington, he means it.

The personal attacks, as Ed Morrissey writes here, may very well backfire on those making them as Gov. Palin is an everywoman type of figure who many families can identify with even more so than two well to do Â Senators with three decades of experience in theÂ Congress as well as one well to do Senator with just 3 years experience in Congress.Â Â As far as the questions about herÂ judgement and readiness to lead, I believe the coming daysÂ and weeks will show open-mindedÂ people who don’t know her that she is more than ready to lead, and that her judgement – while not perfect – is sound.

17 Responses to "The far left and their attacks on Gov. Sarah Palin"