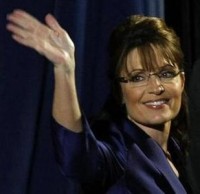 If we in the blogosphere thought this holiday weekend was going to be a slow news weekend, Sarah Palin sure threw a wrench into that, eh? The reax to her resignation are still piling up at Memeorandum as people continue to speculate on the reasons she did it and what it means for her political future.

After sleeping on this, the more I think about it the more I believe her resignation had nothing to do with her wanting “time to prepare” for a 2012 run. It just doesn’t make sense, for all the reasons mentioned by myself and others yesterday:

1) Leaving before you have completed your first term as governor leaves you with little more executive experience than you had when you were picked to be the vice presidential running mate of the Republican nominee, experience that was a bone of contention primarily with the opposition (we’ll just ignore for this post anyway the fact that their candidate had even less experience, but I digress).

2) The “political” thing to do would be to stay in office through your first term, and possibly run for a second term to have additional executive experience under your belt. Sarah didn’t strike me as the type who would run for a second term, as she would have had to immediately begin running for President since her 2nd term as governor (assuming she would have been reelected) would be starting at the beginning of 2011. These days, presidential candidates get started on the campaigning very early.

3) If you’ve got presidential aspirations in mind and you’ve just resigned a year and a half before your first term as governor ends – well before the next presidential race, that is some powerful ammunition for your opponents to use against you. Regardless of whether or not she is a ‘quitter’, that is the perception (as ST reader GWR noted here) and these days perception is reality in politics (remember how Obama was – and still is – perceived as being “capable” of being President without a shred of evidence to back it up?) Not only that, but it looks like you were willing to abandon the post you were elected to out of sheer personal ambition for something bigger. It just doesn’t look good.

I know the left is hoping and salivating over the possibility that there is a “secret, emerging scandal” behind all this but I really don’t believe that’s what has happened here. Barring some as-yet undisclosed serious health issue with either her or a member of her family (which I pray is not the case), I really do think the routine attacks on her from a spiteful, hateful segment of the left, the ethics complaints, and the scapegoating of her by former McCain higher-ups all contributed to her deciding that “enough was enough.” The Vanity Fair hit piece which quoted mostly unnamed former McCain staffers was probably the straw that broke the camel’s back. It became too much.

Yes, all political candidates, especially those with their eyes on the WH, go through unrelenting scrutiny while running, but the viciousness against not only Palin but her family as well went beyond that and crossed a line. As Jim Geraghty reminds us, those types of attacks can get to even the strongest among us:

There was a lot in Palin’s meandering speech announcing her resignation that didn’t quite make sense, but one brief part that did was her mentioning of the ridicule of her infant son, Trig. Also note that in the past month or so, we’ve seen David Letterman joke about Alex Rodriguez knocking up one of her daughters. […]

It’s one thing to step into the public spotlight and know that people are going to ridicule your intelligence, your appearance, your judgment, your voice and accent, etc. But it’s another to know that your loved ones will get that scrutiny, too, and in particular your children. Kids don’t pick their parents. I wrote about this here.

That spurred this terrifying thought: The lesson that the ruthless corners of the political world will take from the rise, fall, and departure of Sarah Palin that if you attack a politician’s children nastily enough and relentlessly enough, you can get anybody to quit.

Mark Steyn weighed in with a similar, even more depressing thought (via ST reader MD):

So Occam’s Razor leaves us with: Who needs this?

In states far from the national spotlight, politics still attracts normal people. You’re a mayor or a state senator or even the governor, but you lead a normal life. The local media are tough on you, but they know you, they live where you live, they’re tough on the real you, not on some caricature cooked up by a malign alliance of late-night comics who’d never heard of you a week earlier and media grandees supposedly on your own side who pronounce you a “cancer”.

Then suddenly you get the call from Washington. You know it’ll mean Secret Service, and speechwriters, and minders vetting your wardrobe. But nobody said it would mean a mainstream network comedy host doing statutory rape gags about your 14-year old daughter. You’ve got a special-needs kid and a son in Iraq and a daughter who’s given you your first grandchild in less than ideal circumstances. That would be enough for most of us. But the special-needs kid and the daughter and most everyone else you love are a national joke, and the PC enforcers are entirely cool with it.

Most of those who sneer at Sarah Palin have no desire to live her life. But why not try to – what’s the word? – “empathize”? If you like Wasilla and hunting and snowmachining and moose stew and politics, is the last worth giving up everything else in the hopes that one day David Letterman and Maureen Dowd might decide Trig and Bristol and the rest are sufficiently non-risible to enable you to prosper in their world? And, putting aside the odds, would you really like to be the person you’d have to turn into under that scenario?

National office will dwindle down to the unhealthily singleminded (Clinton, Obama), the timeserving emirs of Incumbistan (Biden, McCain) and dynastic heirs (Bush). Our loss.

Had McCain/Palin won, she wouldn’t be having to deal with the backstabbing McCain campaign officials because they wouldn’t be having to try and make excuses for why their candidate lost. Had they won, the “ethics complaints” filed against Governor Palin wouldn’t have happened, because she would no longer be Governor. Had they won, I believe you would have seen less scrutiny on Palin’s children, because the WH press corp has an unwritten rule about the children of presidents and vice presidents: hands off.

But they didn’t win, so it became open season part 2 not on McCain, but on Sarah Palin and her family from mostly the same crowd who would go ballistic if the types of attacks waged against both her and her children were made on Michelle Obama or any other female Democrat.

Her resigning stinks, but then again, so does the hypocrisy surrounding the jerks who took personal pleasure out of tearing her family down to the point where she decided that enough was enough.

39 Responses to "Sarah Palin’s resignation: The morning after"