ABC News reports on yet another black “leader” equating Tea Partiers nationwide to the KKK (via):

A civil rights activist and former congressman equated the Tea Party with the Ku Klux Klan today as he blasted a conservative rally planned in Washington, D.C., this weekend.

The Rev. Walter Fauntroy, the non-voting delegate who represented the District of Columbia from 1971 to 1991, called on African-Americans to organize a “new coalition of conscience” to rebut the rally scheduled for Saturday at the Lincoln Memorial featuring Fox News pundit Glenn Beck and former Alaska Gov. Sarah Palin.

“We are going to take on the barbarism of war, the decadence of racism, and the scourge of poverty, that the Ku Klux — I meant to say the Tea Party,” Fauntroy told a news conference today at the National Press Club. “You all forgive me, but I — you have to use them interchangeably.”

Fauntroy attempted to explain the comparison to white supremacists by saying that organizers behind the “Restoring Honor” rally are the same people who cut audio cables from a sound system the night before the historic March on Washington and the Rev. Martin Luther King Jr.’s “I Have a Dream” speech at the Lincoln Memorial.

“The same people who cut the cables on the night before the march, that we paid $66,000 for a sound system, they cut it,” Fauntroy said. “Now from Fox News and elsewhere, they are seeking to turn the world back.”

Read the rest if you can stomach even more of his race-baiting nonsense. Newsflash for Fauntroy: It was Democrats who formed and kept alive the KKK, not Republicans. Not that the facts matter, obviously.

Of course, all of us who oppose this administration’s agenda – whether we/you are affiliated in any way with the Tea Party movement or not – are used to being called a “racist” in varying forms. We saw it during the 2008 presidential campaign season when Obama himself, aided early on by his minions and other prominent Democrats, took it upon himself to not so subtly insinuate that the opposition to him would be based on his skin color.

Once elected, the false accusations of racism continued thanks in no small part to the widespread opposition to ObamaCare. Opponents, including seniors and war veterans at town halls, were routinely called racists, were compared to the KKK – all of which the mainstream media, led by MSDNC, lapped up like a dirty, thirsty dog in the desert who just found a plentiful water stream (the so-called “spitting” incident that never was comes to mind as well).

In the midst of all this have been black conservatives who strongly support the Tea Party message of smaller government and fiscal responsibility. As usual, not a day has gone by that they have not been called “Oreos” and “Uncle Toms” and/or all the other typical sludge and slime from the so-called “party of tolerance.” In all of this, perhaps no one has had it worse than these brave free thinkers who are often accused of “straying from the reservation” for daring not to toe the “they’re all racists!” and “Democrats are your only true friends!” lines that black liberals demand all black people believe under threat of being accused of being a “traitor” to the black community.

But beyond conservatives black and white who have been relentlessly smeared by this administration and its many mindless followers, there is the issue of the word “racism” having no meaning anymore. The word is used so often now by race-hustlers/baiters on the left that it has lost its meaning in mainstream America. “Racism” used to mean discrimination based solely on race. Now, liberals black and white alike would have everyone believing that it means “opposition to a black president/black liberal agenda.” This is one of the more sad aspects, if not the saddest, in the whole back and forth on allegations of racism over the last couple of years. The truth of the matter is that even though we’ve come a long way on the issue of race in this country, we’re at a “holding point” of sorts right now primarily due to the fact that those on the left who have a vested interested in keeping the race card front and center refuse to move forward and refuse to see that people CAN oppose a black liberal president based on something OTHER than race. Simply put, if the Jacksons and Sharptons of America did not have the race card to play anymore, they’d be out of jobs. So they have to fan the flames of racism in order to “stay in business.”

That is not to say that racism in this country has been completely eradicated. It hasn’t been, and frankly I doubt it ever will be. Historically, people of ALL races in ALL countries/civilizations have tended to believe their way of life is “better” than the way of life of those who look different. This is not just true of whites, but blacks, Hispanics, Asians, etc. The key is, though, to not let preconceived notions about people who look different cloud your vision when assessing them on basis of the content of their character. THIS was MLK’s dream, not the nightmare “whitey wants to keep you down” scenario the Wrights and Jacksons and Waters’ and other stuck-in-the-60s black “leaders” paint for their respective constituencies every day. Where’s the “hope” in that picture? There’s not – and that’s exactly the way these “leaders” want it to be.

As always, when I write posts about the race issue, it is without fail that I get an email or two from a liberal who blurts “but Sister, what about the confirmed instances of racism from white people that are reported, some of it coming from your party?” My response always is, yes, there ARE rare instances of racism coming from white conservative movers and shakers (mostly at various state levels) but that you’ll see far more instances of reverse racism coming from the left side of the aisle from the Charlie Rangels and James Clyburns of America, people who never waste an opportunity to blame opposition to black liberals on race. Not only that, but even though there have been a few confirmed instances of racism coming from Republican operatives over the last couple of years, something to keep in mind is this: In spite of those contemptible instances, which party’s POLICIES are most damaging to the black community? The GOP’s, or Democrats? I think the answer is pretty clear.

What it boils down to is that Americans must pay attention not to just what activists and politicos SAY but, more importantly, what their side DOES when it comes to the advancement or regression of equality for minorities. In the case of the right, a few yahoos does not make a majority and overall, the smaller government policies of the right benefit ALL – not just a particular race. These policies (some of them admittedly imperfect) don’t seek to divide; rather, they seek to embody the spirit of equal opportunity granted by our Constitution. 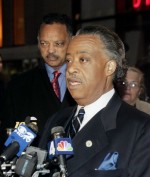 On the left, on the other hand, the racism chorus sings often and loudly purely for the advancement of enslavement all over again of ALL people to the government – and they do so by way of painting each individual group (blacks, females, gays, etc) as “victims” of a “selfish society,” a “society” that they say won’t allow them to grow and advance and be productive members of the community without government intervention. Why do so many “leaders” on the left take this view? For some, I’m sure they really do believe that “society” has made victims of us all and believe that the government is the best way to redress this “wrong,” but for the majority, it’s about one thing and one thing only: Cold, naked, raw power. Think about it. If these special designated “groups of victims” no longer felt like victims, a lot of the movers and shakers on the left at think tanks, liberal publications, serving in government, etc wouldn’t have people around to shamelessly exploit in the first place, and as a result they’d have to find something else to do.

I have a dream. A dream that an overwhelming majority of Americans will no longer feel like they are society’s “victims.” A dream that not only will pave the way for true equality and social harmony as individuals take control of their own respective destinies without relying on “assistance” from a government that thrives on people being “in need,” but one that will also put the power-people who perpetuate the “victim” myth purely for personal advancement and to feather their own nests out of business — for good.

Are you with me?

If you can’t make it to the Restore Honor rally this weekend, C-SPAN will be broadcasting the rally tomorrow, starting at 10:00 AM ET. Looks like you may be able to also follow it via Facebook.

11 Responses to "When will it stop? The meaning of “racism” continues to get diluted as Tea Party is once again compared to KKK"