In a speech to liberal youth activists Wednesday, the former president called out proposals in battleground states like Florida and Ohio that could limit the voter rolls.

“I can’t help thinking since we just celebrated the Fourth of July and we’re supposed to be a country dedicated to liberty that one of the most pervasive political movements going on outside Washington today is the disciplined, passionate, determined effort of Republican governors and legislators to keep most of you from voting next time,” Clinton said at Campus Progress’s annual conference in Washington.

“There has never been in my lifetime, since we got rid of the poll tax and all the Jim Crow burdens on voting, the determined effort to limit the franchise that we see today,” Clinton added.

“Why should we disenfranchise people forever once they’ve paid their price?” Clinton said. “Because most of them in Florida were African Americans and Hispanics who tended to vote for Democrats. That’s why.”

The assertion is a bald-faced lie, and Bubba Clinton knows it. He’s just doing what he and his party do best: Shamelessly pander to “minorities” for political gain. The claim is especially ridiculous when you consider the outreach underway – led by prominent GOPers like former FL Governor Jeb Bush – to bring more Hispanic voters into the GOP fold, and when you consider the rise of black Republicans and Hispanics both in elected office and in other leadership, speaking, and activist roles over the last several years. So I guess the idea is to reach out to these voters while underhandedly trying to make it so it’s harder for them to vote?

Yeah, I’m scratching my chin on that one, too. 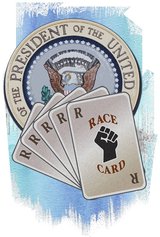 Is anyone here surprised by this familiar line of baseless attack? Of course not. We’ve seen the race card played by the left so many times since Barack Obama started running for President (and even before that, actually – going back decades) that if we placed one race card behind another on the ground, we could circle the Earth two or three times. And now that we’re nearing Campaign 2012, the Democrats are cranking up their efforts tenfold at throwing the race card into the mix because Barack Obama’s poll numbers are in the tank, and left wing movers and shakers are desperate to give their disappointed but faithful diehards motivation to go out to the polls next year in an effort to put our celebrity President back in office for another four years. Even the President himself has shown that he is not above playing the race card if it means he can bring in a tidy sum of campaign ca$h can be gained in the process.

It is gutter tactics like these, which Bill and Hillary both have used before, that kept me from feeling sorry for them in 2008 when candidate Barack Obama’s campaign slyly and effectively (and bogusly) used it against them. Being falsely accused of racism is something that conservatives have gotten used to happening over the years, so it was easy to identify with what was happening to Bill and Hillary Clinton when Barack Obama’s campaign – and his prominent supporters – essentially accused him of being no better than “racist Republicans” when it came to criticism of “The One.”

Clinton went on to add:

“Why is all of this going on? This is not rocket science. They are trying to make the 2012 electorate look more like the 2010 electorate than the 2008 electorate,” Clinton said.

And just how did they engineer the 2010 elections to suppress the black and Hispanic vote, considering the voting proposals Clinton whines about weren’t even on the table – because Republicans weren’t yet in positions to put them there??

My co-blogger, as usual, hits a homerun:

This is obviously a coordinated Democratic strategy to fight any effort to shore up the integrity of the voting system. They have to resort to waving the bloody shirt of racism because they have no honest argument for opposing something as reasonable as presenting a photo ID when voting, because to be honest would be to admit they want to make fraudulent voting as easy as possible so they can cheat their way to victory.

Yep, and it’s also a way of keeping the race card out there front and center in the minds of the American voter – especially the “minority” American voter. Because they know they can’t survive without it.

PS: I wonder if Clinton clued his audience in on just which party it was who introduced Jim Crow laws in the first place? Nah …