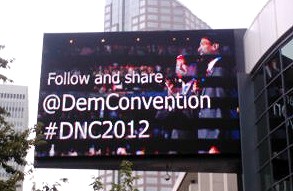 Well, gang, to say it’s been an “eventful” week here in Charlotte as a result of the Democratic National Convention is a vast understatement. On one hand, I’m glad it’s here because it’s given me a chance to reconnect (and in some cases work) with conservative friends in town to cover it, as well as given me the opportunity to meet others who I knew through blogging and social media but who I have never had the opportunity to meet (like Michelle Malkin!!). On the other hand, however, I couldn’t help but feel yesterday while I was uptown that I lived in a strange foreign country, where the ideas being pushed were so alien, so far out that I couldn’t fathom how anyone in their right minds would push them. Then again, we ARE talking about liberals here so that shouldn’t exactly be a huge surprise.

In no particular order, here are my thoughts on what I’ve seen, heard … and smelled so far this week:

— The local media coverage of the convention has been OUTSTANDING. No joke. Between social media, news websites, and TV and radio, local reporters here have done a great job. My hat is off to them. Even the Charlotte Observer, of which I am normally a staunch critic.

— The much-hyped “March on Wall Street” Sunday was a bust in terms of the number of attendees for the rally and march. Predictions were that between 2,000 and 10,000 would show up to protest, but it ended up being roughly 800-850, according to police estimates. A nice-sized number, but nowhere in league with where organizers wanted it to be. I watched several live streams of the gathering at Charlotte’s Frazier Park uptown, which was the “base” for where things were kicked off on Sunday. You had your garden variety anti-capitalist/hate America crowd in attendance, and they were loud and proud as they marched past the Duke Energy building and Bank of America, which were both heavily guarded by law enforcement – as you can imagine. There were two arrests that day.

— And speaking of, we’ve already passed the number of arrests they had in Tampa (3). I don’t know the exact total number of those arrested here so far, but 10 of the “Undocubus” illegal immigrants were arrested yesterday – not because they don’t have “their papers”, but because they refused to move out of the line of traffic. They were released. And won’t be deported, per ICE (shock).

I took the below video yesterday of a demonstrator (not with Undocubus) getting carted off yesterday:

He claims he was arrested for wearing a mask, which is illegal in Charlotte (and was well before the convention was planned).

— One thing I wanted to make sure I did yesterday was to get pictures and/or video of protesters in action. Thanks to a tip from a friend who was there for the same reason, I – along with another friend – went down to the corner of Caldwell and Stonewall and inserted myself in the mix of demonstrators who were staging a sit-in and protest in support of American traitor Bradley Manning and Wikileaks. Code Pink ringleader Medea Benajamin was in the crowd, and made her way to the “free speech zone” set up nearby. Here’s video I took of that of that below. Oh, and that’s me yelling in the background (language warning):

The word that comes to mind immediately when I see or hear Medea Benjamin is “vile.” But even that doesn’t quite cover how detestable this woman is.

— The SMELL in the middle of that protest was awful. Simply awful. It was hot, humid, raining off and on (as it had been for the last several days), and I was pretty close to wishing I had a bandana to cover my mouth and nose but not even that was/is technically allowed uptown by the police. So I dealt with it. For you.

— While on the topic of protesters, I ventured down to the “new” Occupy Charlotte encampment, which is based in Marshall Park that CMPD has allowed them to have, in spite of a beefed-up camping ordinance put in place earlier this year for the express purpose of preventing this very thing from happening during the convention. I took numerous pictures of Occupy Charlotte, and not many people were there at the time (there are approx 20-25 tents on site), but I did get what I think was a good picture of the essence of the Occupy movement, both in Charlotte and other cities around America:

I would estimate that at their HIGHEST count, the protester numbers are probably no more than around 200. Although Sunday’s MOWSS march did not live up to their expectations (or down?), that hasn’t stopped them from utilizing their usual tactics of pushing the elderly, women, and the handicapped towards the front, and being deliberately antagonistic towards police, as was on full display yesterday.

— There was a strong contingent of pro-life marchers uptown. They were WAY over the top, and I say that as a staunch pro-lifer myself. That’s all I’ll say about it.

— The non-protester crowds were for the most part pleasant. They were – unsurprisingly – enthusiastic, seemed excited (all over the wrong candidate, of course), and were taking pictures like crazy of the MSNBC stage set up at the EpiCentre, and the now infamous Obama sand sculpture. Here’s one I took:

Yes, it was that big. Almost as big as the ego of our celebrity President himself. But not quite. On a related note, I did spot Chris “Tingles” Matthews at one point …

I’ll post many more pictures later on Facebook of the DNC stuff – including more from Occupy Charlotte, and provide a link back here so y’all can view them.

Lastly, First Lady Michelle Obama made her big speech last night in front of delegates and celebrity types, and – shockingly (not) – the MSM and pundits are fawning over her alleged ability to “connect” with crowds. Hollywood types who are in town this week, and who aren’t, made their feelings known about Mrs. Obama’s speech, with some admitting they were crying during and after the speech. Well, I was too – sorta – but for much different reasons. Make sure you read this piece at Breitbart.com from Joel Pollack, who fact checked the First Lady and found her assertions to be, well, lacking. I know, hard to believe …

Aaaaand, guess what? The President has now officially arrived in Charlotte.