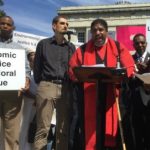 North Carolina’s Rev. William Barber has landed himself in hot water this week over remarks he made over the weekend on MSNBC’s AM Joy show regarding prayer and faith leaders who pray for elected officials:.....   [Read More] 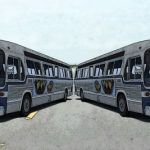 Beyond the highly questionable attendance numbers organizers and their supporters have been giving for this year’s ‘Moral March‘ protest in Raleigh, American Lens was curious about something mentioned in passing in the Charlotte Observer’s article on the various crowd estimates for the event:.....   [Read More]

With the ridiculous Code Red outrage that has translated into self-serving “boycotts” of the state of Indiana after last week’s passage of their own version of the President Clinton-approved 1993 federal Religious Freedom Restoration Act, and with Arkansas expected to be the 21st state after Indiana to sign into law an RFRA passed by their state legislature, I thought it would be a good idea to speculate on what it all means for North Carolina......   [Read More]

My latest at IJ Review is about how a new group of so-called “centrist” elected Democrats in the North Carolina state house have formed in an effort to show North Carolinians that not only are there still some pro-business Dems left in NC, but also that not the entire party has gone off the deep end. Their hope is to try and turn the party around to where they are winning elections again and are no longer alienating moderates and conservatives that used to be well within their ranks but who are becoming increasingly dissatisfied at some of the positions state and national Democrats have taken. Judging by how the “progressive” Moral Monday movement has taken hold (see photo above), I’d say their concerns about the direction of their party are well-founded......   [Read More]

The far left Daily Kos-led Netroots Nation conference was held this past weekend and, not to be outdone by the other extremist speakers who would get their chance at the mic after him, NC NAACP’s Rev. William “Moral Monday” Barber made sure to remind the Democrat party faithful in his opening keynote of what he (and they) perceive are the ‘real’ reasons why Republicans pass laws like Voter ID and refuse to budge on President Obama’s agenda:.....   [Read More]