Another Democrat, former Brooklyn Rep. Liz Holtzman, is pushing for Bush’s impeachment via a new book she’s promoting, which is discussed here.

Prepare. Despite Pelosi’s denials that this will happen, Rep. John Conyers, who is in line to be the chairman of the House Judiciary Committee, has been itching for years to impeach Bush. So have other Democrats. He – and they – may soon get their chance to try.

Although the donkey logo fits them perfectly, I think the new symbol for the Democratic party should be Cujo: 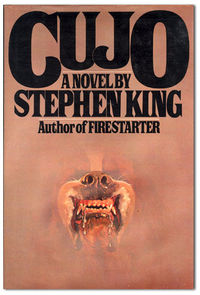 Rabid, foaming at the mouth, hyper-angry dangerous far lefties salivating over the opportunity to take a bite out of the President. Will the few moderates and conservatives elected to serve in the House for Democrats be able to save them? I don’t hold out much hope, especially considering the fact that the far lefties in the party have made it clear they will not be ‘suppressed.’

69 Responses to "The push for impeachment starts"