**This post will be updated frequently and kept on the top of the page – newer posts will show up below this one. I will start a new post when results begin to come in. (Evening update: Here’s my latest post). Please feel free to utilize today’s open thread to post about any non-Campaign 2008 related news stories, so they don’t get lost in the shuffle of posting/commenting in this thread. **

Today is the day that has been commonly referred to as Super Duper Tuesday, due primarily to the fact that we’ll see more states holding their primary/caucus than at any other time in our history. 24 states will decide today who they’d like their respective Republican and Democrat nominee to be. Real Clear Politics has a handy dandy chart showing what states are in play today, the delegate counts in each one, whether or not it’s a closed primary, and which states are “winner take all.”

1,681 delegates will be up for grabs today for Democrats, while 1,023 will be at stake for Republicans. For the Democrat candidate to secure the nomination, they will need 2,025 delegates. For the GOP nom, 1,191 are needed (via the SF Chronicle). As it stands now, here is the Republican delegate count – the Dem count is here.

RCP has the latest and greatest polls on how your candidate ranks in a particular state.

Something interesting I saw last night on CNN’s political coverage is that it is possible for a candidate to win California but come in second in the delegate count, which as we all remember is what happened in Nevada, with Barack Obama winning one more delegate than La Clinton.

As to predictions, Michael Barone posts a Super Tuesday guide with his thoughts on what will happen in some of the early states (he posts that today 22 states will be in play but, as noted earlier, it’s actually 24). Scott at Election Projection posts his SDT projections here. Make sure to scroll down to read his entire post as he explains how some winner take all and proportional states are different than others.

About the only predictions I’m willing to make at this point:

1) Hillary will win in Massachusetts, in spite of the fact that her rival has been endorsed by Ted Kennedy, John Kerry, and several other prominent MA liberals. I think at the end of the day the Dem nomination will still be up for grabs, with no clear “frontrunner.”

2) I think McCain will come much closer to the nomination today, as he’s polling ahead of Romney in double digits in several states. Anything can happen though, as we’ve already seen how the polls aren’t always an indicator of the final winner.

If you live in a SDT state, I would love to hear about how your experience went voting today, if there were crowds, etc.

Time for me to grab some breakfast. Make sure to check out Memeorandum for other news stories/blog posts related to Campaign 2008.

Update 1 – 9:58 AM: WCBSTV reports that there have been some technical difficulties with some voting machines in Hoboken, NJ – at the same polling site where NJ Gov. Jon Corzine votes.

Drudge is reporting a “shock poll” that now shows Barack Obama up 13 points over Hillary in CA, and Romney over McCain by 7 there. These things are so erratic.

Also, Pajamas Media has correspondents blogging from Super Tuesday states, which you can read about here.

Update 2 – 10:56 AM: I may address this more in detail later this week, but I wanted to point out how Rush has gone from saying in 2004 that the Democrats couldn’t be trusted to lead this country in the GWOT, to now saying – in frustration over the idea that pragmatic conservatives would vote for McCain based on his national security credentials – that Hillary Clinton or Barack Obama will not, “surrender the country to Islamic radicalism or the war in Iraq.”

Anyone else feeling surrealistic about some of the things being asserted – and not just by the candidates – this election cycle? (Update 2A – 12:57 PM: MKH is on the same wavelength)

Update 3 – 11:39 AM: Via Google News, I see that in several SDT states across the country, “huge” and in some cases “record” turnout is being predicted (CA, NY, CT, and MA, among others). MSNBC’s First Read provides a “snapshot” of voter turnout in a polling site in Missouri.

Update 4 – 12:02 PM: Mark Blumenthal provides some tips on how to make sense out of exit poll results (via Instapundit).

Update 5 – 12:26 PM: Earlier, I mentioned something I saw on CNN last night about how the winner of California could actually wind up with less delegates from that state than the 2nd place candidate. Marc Ambinder explains how that works here.

Update 6 – 12:30 PM: Fox News “Urgent Queue” reports that, apparently in response to criticism from McCain over Romney’s comments regarding Dole’s letter to Rush stating his support of McCain, Romney has tried to call Dole to make clarify his remarks, but has been unsuccessful.

And for the record, here was what Bob Dole’s letter to Rush Limbaugh stated. Contrary to popular bloggers like Michelle Malkin, who have seriously distorted Bob Dole’s remarks, it was not a plea from Dole to Rush Limbaugh to “hush hush.” He was simply stating what an emerging number of conservatives are, and that is that whoever the nominee is, he is going to need our support in the battle against the Democrats. In fact, last night on Hannity and Colmes, Dole made it clear he’d support either candidate (McCain or Romney) come November.

And as a sidenote, even conservative talk show host Laura Ingraham, who has been among those leading the charge against a McCain nomination, implied this morning that if it came down to it, she would pull the lever for the Mc come November.

SAN FRANCISCO (Reuters) – San Francisco voters will decide on Tuesday whether to remove the famous Alcatraz Prison visited by thousands of tourists a day and instead create a “global peace centre.”

The proposition sharing the presidential primary ballot comes from the director of the California-based Global Peace Foundation who gives his name as Da Vid. He says transforming Alcatraz will “liberate energies, raising the whole consciousness of the Bay Area.”

Supporters would like to raze the prison and build a medicine wheel, a labyrinth and a conference centre for non-violent conflict resolution. Volunteers collected 10,350 voter signatures last year to put it on the local ballot.

Gaius at BCB calls the vote right: “Between The Rock And A Dumb Place.” 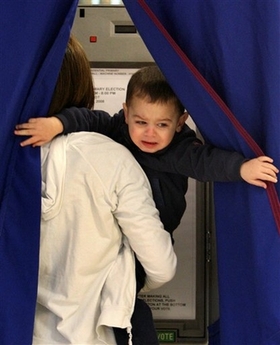 Caption: Two-year-old Ethan Yost attempts to get out of the voting both while his mother Maria tries to cast her ballot in the Super Tuesday presidential primary election, Tuesday, Feb. 5, 2008, at a polling place in Greenwood, Del. (AP Photo/Rob Carr)

Update 10 – 2:28 PM: Mike Huckabee has won WV’s caucus. Not quite sure how many delegates he will get, but the total up for grabs was 30.

Update 12 – 3:52 PM: The Guardian reports that over 3 million absentee ballots were sent in by CA voters by Monday night, which could, according to them, account for nearly 40% of the vote (h/t: HH).

Would love to hear from some CA voters as to how things are looking out there. I’m watching Greta on Fox News and they are reporting that 9 million are expected to turn out in CA to vote.

Also, Media Bistro is reporting that Hillary Clinton has accepted an offer to debate on Fox News, but there’s no word yet on whether Obama will take part as well. Will be interesting to see if he does, considering the Democrats attitudes last year towards debating on Fox.

Here’s an hour by hour guide to when the polls close in each of the SDT states. More here, including predictions.

Update 13 – 4:43 PM: The Romney campaign is accusing McCain and Huckabee of conspiring behind closed doors to ensure he wouldn’t win in WV:

“Unfortunately, this is what Senator McCain’s inside Washington ways look like: he cut a backroom deal with the tax-and-spend candidate he thought could best stop Governor Romney’s campaign of conservative change.

“Governor Romney had enough respect for the Republican voters of West Virginia to make an appeal to them about the future of the party based on issues. This is why he led on today’s first ballot. Sadly, Senator McCain cut a Washington backroom deal in a way that once again underscores his legacy of working against Republicans who are interested in championing conservative policies and rebuilding the party.”

Marc Ambinder follows up with this:

After the first round of balloting in West Virginia, Mitt Romney was solidly in the lead with 41% of the votes, followed by Mike Huckabee with 33% and John McCain with 16%.

Since 50% is needed to win all 18 delegates, a second balloting is underway.

But sources say that representatives for John McCain called many of his reps in WV and asked them to vote for Huckabee…in order to thwart Romney on the second ballot.

On the other side of the aisle, Barack Obama was just shown in an interview with reporters shortly after he voted, and he’s doing what so many politicians do coming down the homestretch: playing the low expectations game.

Sidenote: Is Shep Smith high? Or is he just pumped up at the idea of having a young female group of political commentators surrounding him? I’m watching probably what will be the worst part of Fox News SDT coverage. Bring on the later hours and Brit Hume!

Update 14 – 5:28 PM: Jim Geraghty is reporting on early exit polls from MA, which show Romney with a 20 point lead over McCain, and Hillary and Obama battling it out. Massachusetts polls close at 8.

*** That is the last update for this post. Here is my latest post on SDT, which will focus on the results of tonight’s primaries/caucuses.**