Another pre-election Halloween rolls around, and another opportunity for moonbats to reveal themselves at their worst presents itself:

CATHARINE — Ron Havens has a reputation for provocative Halloween displays that reflect his strong political views.

But even Havens was pretty sure his latest effort was over the top. That didn’t stop him from setting it up in plain sight anyway.

But the Obama figure looks like he is running, and the McCain likeness is dressed in the hooded robe of the Ku Klux Klan and is carrying a baseball bat.

Havens is quick to point out he is a liberal and a big supporter of Obama, and that the scene is meant to provoke thought about the way he believes Obama has been unfairly treated by the McCain campaign.

“I figured it would be equally offensive to everyone. It’s just for shock value,” Havens said. “McCain has been rabble-rousing, calling Obama a terrorist and a Muslim. The McCain campaign has gotten so ugly. That’s what the message is. I can see how people could take this the wrong way. I’m not advocating anything. It’s sarcasm.”

First, this doofus couldn’t prove that “McCain’s been calling Obama and a terrorist and a Muslim” on his best day because he hasn’t done any of that. In fact, he’s repudiated any attacks he’s perceived as being remotely against Obama’s race.

Here’s a photo of the Halloween display in Havens’ yard: 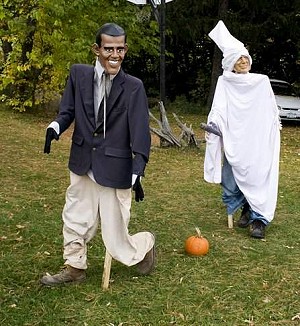 The article goes on to talk about how Havens has set up political Halloween displays before that have villainized the Bush administration in various ways (how shocking).

But here’s where it gets interesting (emphasis added):

Georgia Verdier, president of the Elmira-Corning Branch of the National Association for the Advancement of Colored People, said she was concerned about the injection of race into the presidential campaign when someone called her to complain about the scene.

After viewing a photograph of Havens’ display, Verdier said it seems innocuous enough, but she’s still concerned it may send the wrong message.

“It looks friendly but I am concerned not so much about this display, but in general about the fear and hate that have entered the campaign,” Verdier said. “This display appears friendly to me. But that’s my take. A young lady passed by and had other feelings. We need to be concerned about that. I think we all need to be careful about what messages we send. The message we send is not always the message received.”

Oh the message Ms. Verdier is sending is exactly the message we’re receiving (and have been for a long time now) and that is: It’s ok to be racially offensive if you’re doing it in the form of an attack on Republican candidate for office. Not only that, but Ms. Verdier, like Havens, demonstrates sheer ignorance on the issue of “injection of race” into the presidential campaign because if either of them had done their homework, they’d see that it hasn’t been McCain nor his campaign who have injected race into the campaign over the course of the last 10 months. It’s been Barack Obama – and he’s done it multiple times.

As a sidenote, how can anyone in their right mind possibly view that display as “friendly”?!

Once again, we see a narrative being set by the media on “racist, raging Republicans” – Havens and Verdier whine about the issue of race being injected into the campaign “by John McCain” without knowing what the hell they’re talking about, and the Star Gazette publishes what they say without challenging whether or not it’s accurate. This is one more thing we as Republicans can “look forward to” if Obama is elected: the media swallowing whole most every allegation of Republican racism without question that comes from “concerned citizens.” Yet let one Republican question Obama’s associations with far left wing radicals, and the media goes ballistic and sees “racial undertones” behind the questioning. And after that, they turn around and send “investigative reporters” to places like Wasilla, AK in order to do things like comb over Gov. Palin’s record as Mayor of Wasilla to find out whether or not she really did ban books (she didn’t).

Related: Patterico smacks down another media myth: Nobody Yelled “Kill Him” About Obama at a McCain or Palin Rally.

5 Responses to "Halloween in Moonbattia, USA"