In the past couple of days we’ve seen some disturbing news come to light as reported in the UK media about an upcoming British ‘fictional documentary’ that looks at what the US would be like if President Bush was assassinated.

Check out this ‘promo’ photo: 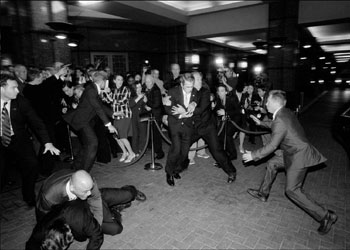 When does the movie premiere? September 10, at the Toronto Film Festival. It will be shown on the BBC’s Channel 4 in October.

Channel 4, by the way, calls the film “thought-provoking“, and indeed, I can testify this today that my thoughts have been provoked – but not in the way director Gabriel Range likely would want them to be. Seriously, what kind of “thought” is this movie supposed to “provoke” outside of legitimizing the far-left anti-war hate-Bush fantasy of “Dumbya McChimpy” finally being, shall we say ‘bumped’ out of office?

CTV Canada calls the film “edgy” – and I would agree, if they meant it in the sense that the director and others involved in the making of this faux crockumentary were on the edge of completely losing it. Scratch that: I think they already have gone over the edge.

I’d like to know exactly when it became fashionable to write about or discuss casually or produce a film about a fictional assassination of a sitting President? Is this what is supposed to pass for ‘art’ nowadays among progressive ‘artists’ both home and abroad?

I think Jules Crittenden, who wrote about this today in the Boston Herald, has a much better suggestion for a movie subject:

How about a Hollywood blockbuster that depicts Britain under Sharia law?

Good one. That assumes, though, that Britain won’t already be under Sharia law by the time that one was produced.

Here’s my suggestion – it’s not a movie, but a TV show that the far left Nutrootians here in the good ol’ US of A would cotton to in a New York minute: a modern day version of the popular ABC series Fantasy Island, with Michael Moore in the role of Ricardo Montalban’s “Mr. Roarke” character, and Cindy Sheehan playing Herve Villechaize’s “Tattoo” role. Guests would include staunch supporters of both of these darlings of the Nutrootian left, who would visit in order to have their warped Bush-hating fantasies come true. Would I watch it? No (quite frankly, I’d rather watch Godzilla – and you all know how I feel about that one). Recommend it? No. But I think the Nielsen ratings alone would help us (even more so than this poll does) be able to better determine the actual percentage of “edgy” people in this country who share the same or similar fantasies about our President.

On the other hand – hmmm. Is that something I really want to know? Believing that about 25% of the country are out of their minds with hatred over Bush is bad enough, but if the number happened to be even higher than that ….

Bryan at Hot Air has been on top of Brit media reports about this film with posts here and here. Make sure to read those two pieces for additional info on this now-acceptable ‘artistic’ trend.

Update 1:46 PM: Here we go again. Look at the answer options to this MSNBC poll that asks whether or not the film should be shown in the US:

A new film depicts President Bush being assassinated. Should it be shown?

No, the filmmakers have gone too far.

Perhaps — but not in the United States.

15 Responses to "Assassination fascination – and suggestions for future ‘fictional documentaries’"